Car on the Run review: love letter to the first Grand Theft Auto?

Indie studio Playcore has released an unusual game called Car on the Run on smartphones. We are promised that the project is inspired by the first installments of Grand Theft Auto; remember: top view, robberies and chases with the cops? So, all this is here, only with their own ideas and on iOS and Android mobile phones. I tried this game and now I’m going to tell you what Car on the Run really is, have we seen this before and how many cops will it take to turn a light bulb?

Car on the Run is an action game about bank robbery and cash truck robberies. It was developed by the guys from Tunisia, who promise a lot in future updates. The game looks unusual and shareware; this imposes some restrictions on it, which we will talk about in detail a little later. In general, I like this genre, especially if you play there as a mafia or an inveterate criminal. Let’s see if the game is worth the candle and we will get what Playcore promises us.

The first thing that catches your eye is the design of Car on the Run. It is executed in black and white style… This is an interesting move, since you pay all your attention to colored things: pointers, cubes, collection point, and so on. In general, I have nothing against this style; played LIMBO myself and enjoyed it. But it is not entirely clear what idea the developers of this game were trying to convey. There are various cities here, but you only remember this when you see a landmark, for example, the Arc de Triomphe in Paris. Often, when the car jumps into the air, its model does not increase, there is no play of shadows. You remember about the flying car only in those moments when it does not crash into the car.

The main menu is made on a C: the name of the game, a lonely car and three bookmarks, one of which is to spend real money in the store. And yes, there is no Russian localization. This does not really bother: there is no plot and, accordingly, no dialogues, but still. If we evaluate the models of cars, tanks, helicopters and buildings, then everything is done realistically. In the main menu, pick-me-up metal plays. If you don’t like it, you can turn off the audio in the settings. During the missions themselves, just an exhilarating soundtrack for the chase. Let’s move on to the most important thing – the gameplay. 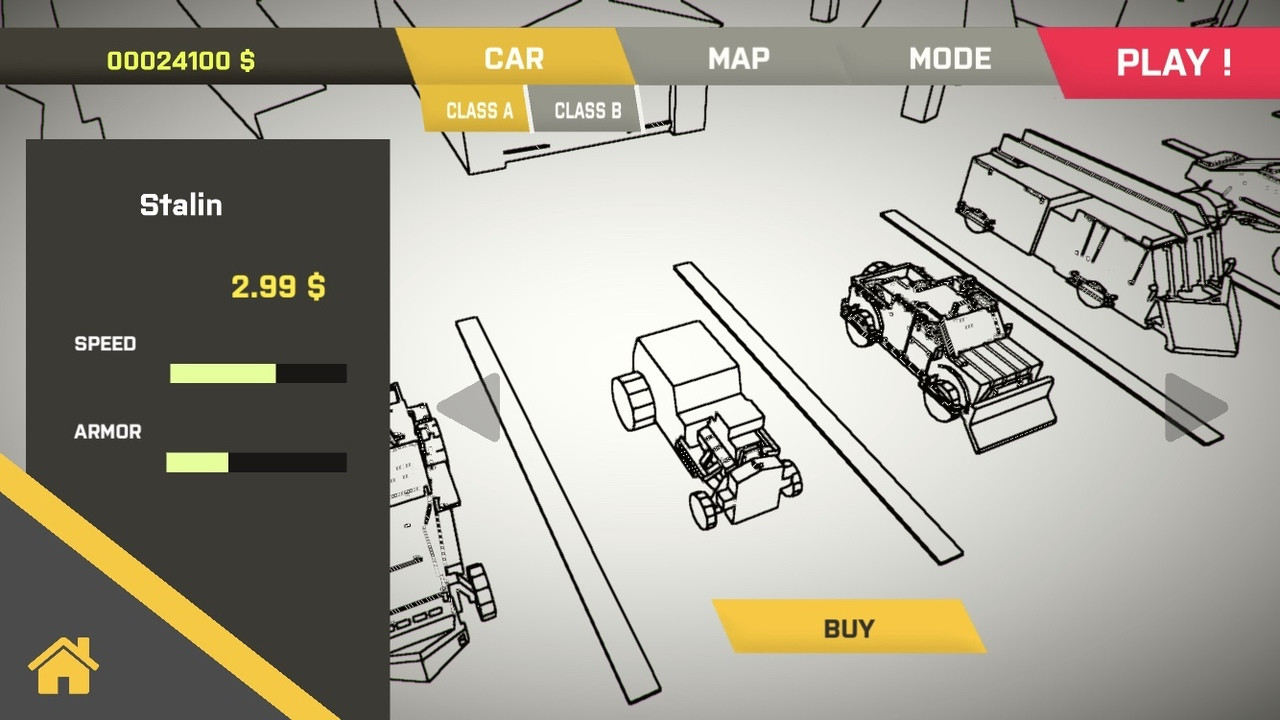 The gameplay is split into two modes: mission and survival. In the first, the difficulty is increasing, but the goal is the same – to catch up with the trucks with money, crash into them before the explosion (this happens in the screenshot), break a dozen police cars and get to the place of evacuation. Sounds like a simple task on paper, but management fails. You can get used to it, but for some reason you cannot drive back. Just in the screenshot, in a few seconds they will destroy me, because my nose fit into the trees. At the very beginning of the mission, we already have one star, because the case takes place after a bank robbery. The longer we sit on the map, the higher the level of fame becomes. As in Grand Theft Auto, the quantity and quality of the police depends on this. If on one star these are just passenger cars, then on the third one a helicopter, a military Hammer and tanks are chasing us.

It’s easy to get away from the chase on cars, but any, even a slight collision with the cops, and we lost HP. Because of this, I switched to bulldozers and tractors, but although the damage to me decreased, maneuverability broke through the bottom. It turns out to get away from the chase only with the included nitro. Yes, the more we survive, the more money we get. At first you don’t complain, but after buying your first tractor you begin to understand: money is being given too little. So that you understand, for one mission (~ 3 minutes) I get 5,000 bucks. One of the coolest wheelbarrows – the grader – costs $ 732,400. In general, I need to play 146 times or spend 7.3 hours continuous gameplay. Donut bites, so don’t expect to buy this grader for even the most expensive one-time purchase.

My advice: first we rob the caravans, and only then we deal with the cops. Otherwise, you will be chasing money trucks with tanks and helicopters on the tail. 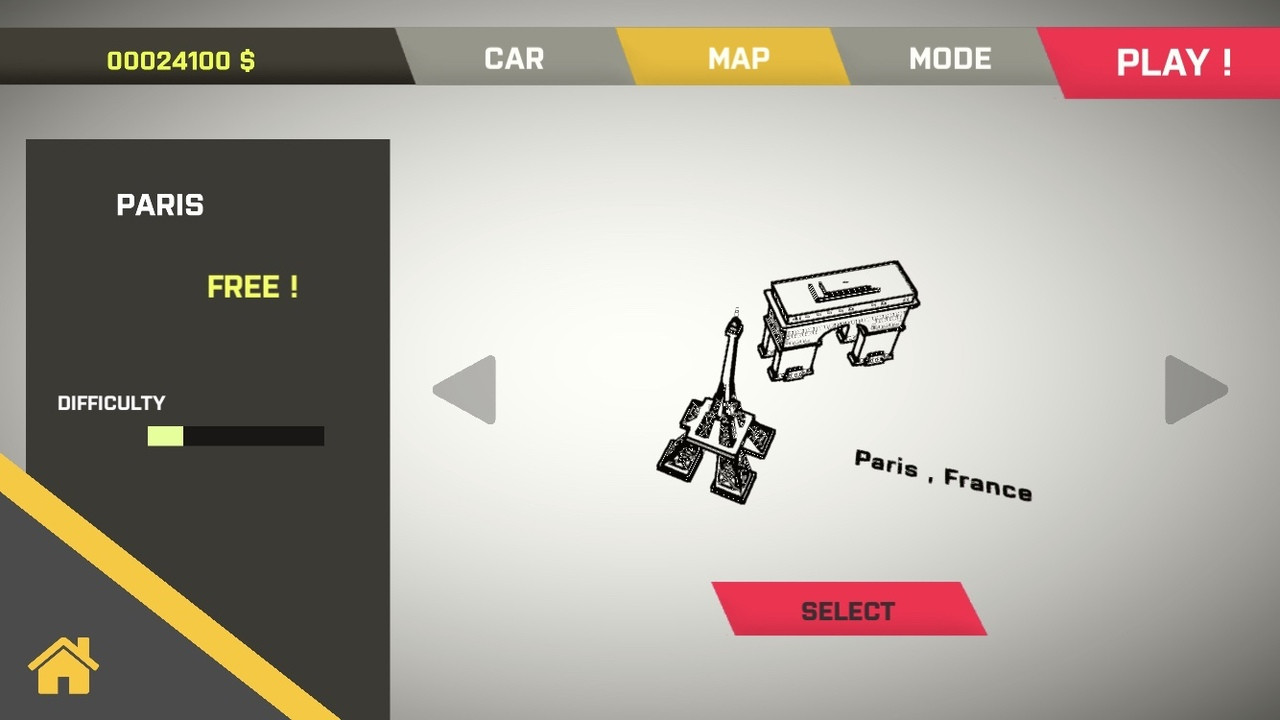 The cities are as follows:

They differ in the level of difficulty. Paris is free, for the rest you have to pay dollars. There is not much difference, sometimes on more difficult maps you go through a mission faster than on light maps. But if you’ve always dreamed of robbing a bank in virtual Rome, then your dream has come true.

Calling the idea of ​​Car on the Run a new one does not turn the tongue. The developers do not position it as such, so it doesn’t matter. There are indeed similarities with the first installments of Grand Theft Auto. Apparently, the Playcore studio tried to do something peculiar, not similar in design to other projects. In this regard, the developers gave their best. If we work on the conditional freebie, add the Russian language, as well as new content, then the game will find its fans. At the time of writing the review, she has 4.7 Stars in the App Store. The size is only 130 MB. This isn’t some regular battle royale or auto-butler, which is a huge plus.

In general, Car on the Run is a kind of game that will gather around only ardent fans of this genre. In the near future, we are promised to add unique achievements, bonuses for progress, as well as new cars. We will follow the project.

The First Soldier will show next week