Curse of the Dead Gods: Review

Immediately after leaving Hades, two things became clear. The first is a masterpiece. The second – now, if not all, then many “roguelikes” will be compared with the creation of Supergiant games… And even more so, it concerns the Curse of dead gods… How is it so similar, and how is it different from Hades?

This is a wonderful game.

Take a look at the screenshots, watch the trailers – and everything will become clear. Painters Passtech Games have proven themselves well in Masters of anima, and already in Curse of the dead gods, they really want to give a standing ovation. The styling is in many ways similar to what we saw in Hades, but in general, there are more gloomy dark colours. To the extent that very often, little is visible on the screen. This is due to the setting of the game, in which …

There are gods too …

These gods are ancient, evil, and, it seems, dead. Our hero, a seeker of treasures and dangerous adventures, disturbed their tomb and found these adventures. True, an award from the LGBTQ community Curse of dead gods, Unlike Hades, is unlikely to receive. Here you are not Ancient Greece with its sun, light morals and Achilles with Patroclus, but a cursed tomb temple, where we awakened the incarnations of the ancient animal gods – the leopard, the eagle and the snake. It is also full of their henchmen, led by heroic champions. But you cannot communicate with them. They do not talk but immediately yell and beat. 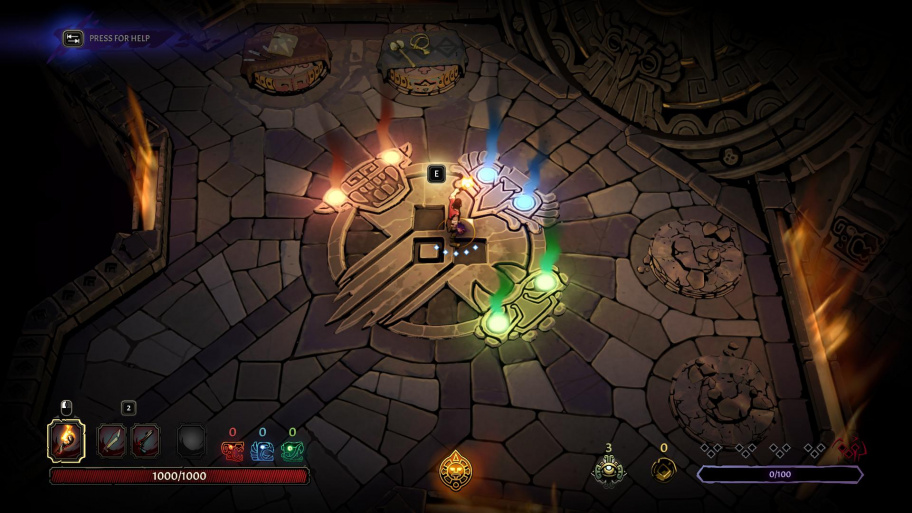 The entrance to the temple has become our home for a long time.

… But there is no plot

Curse of the dead gods, Unlike Hades, a blatantly unplotted game. We come to the aforementioned cursed temple in search of treasures, and in the end, we fall into a trap – there is no way out. You can only go forward, dying and reborn over and over again, to try to consistently go through all the sections of the temple, first defeat all the champions, then the boss gods and eventually beat the final, most difficult race. 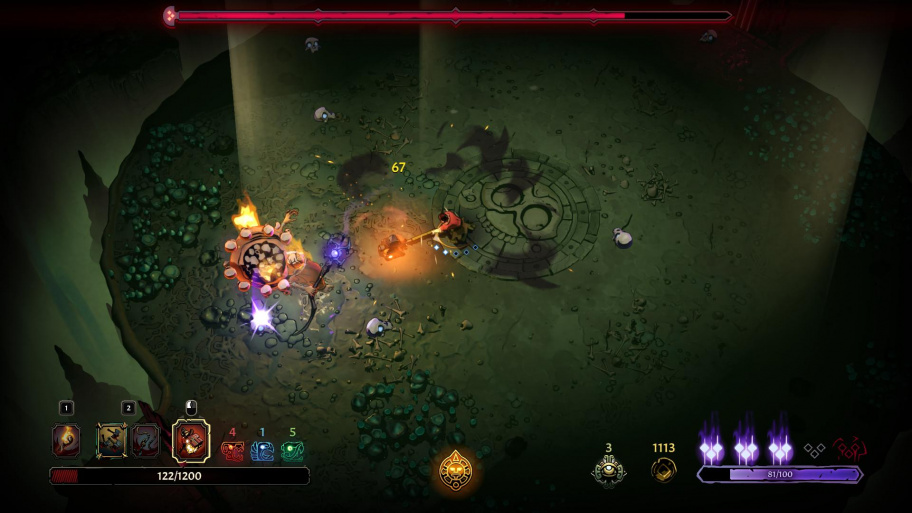 Champions are powerful, and what can we say about deities …

Everything, no dialogues, additional quests, prisoners encountered along the way, or at least merchants. There are not even pages of the code. Is it good or bad? I will say this: it looks quite logical within the dark setting. What kind of dialogue and relationship building, when we need to get out of the deadly trap with all our might, from an ancient tomb full of darkness, skulls, monsters and traps?

The pitfalls here, by the way, are sometimes quite unexpected.

A classic roguelike approach that has its dark charm. In this sense, and the atmosphere, Curse of the dead gods closer to Darkest dungeon…

But the gameplay itself again makes you remember about Hades… and don’t be surprised, oh Slay the spire… Just in Curse of the dead gods, the same as in the cult card “roguelike”, the scheme of choosing how to advance through the levels. After clearing each room, we choose where to go next, focusing on what we find there – money, weapons, an upgrade for it, new relics, and so on. Or is it worth the risk and heading into the unknown? 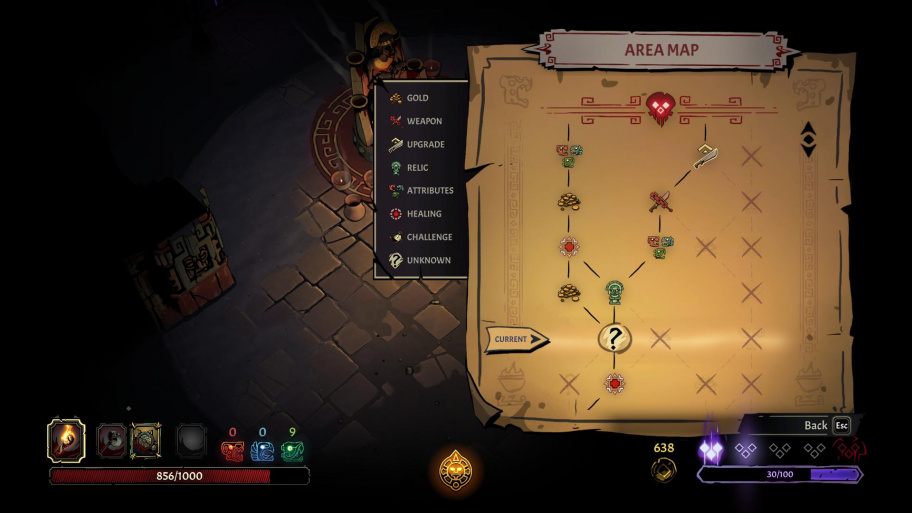 AT Hades, we, according to the same principle, determined which rooms and doors to go to, knowing approximately what awaited there. In general, the scheme is the same: we run, we fight, we get the selected bonuses, we go to the next door. At some altars, you can improve the character’s parameters – dexterity, which increases the damage of all weapons, constitution and attentiveness, responsible for the amount of gold found. According to legend, attribute upgrades are just gifts from local gods trying to prolong the deadly game with a prisoner. 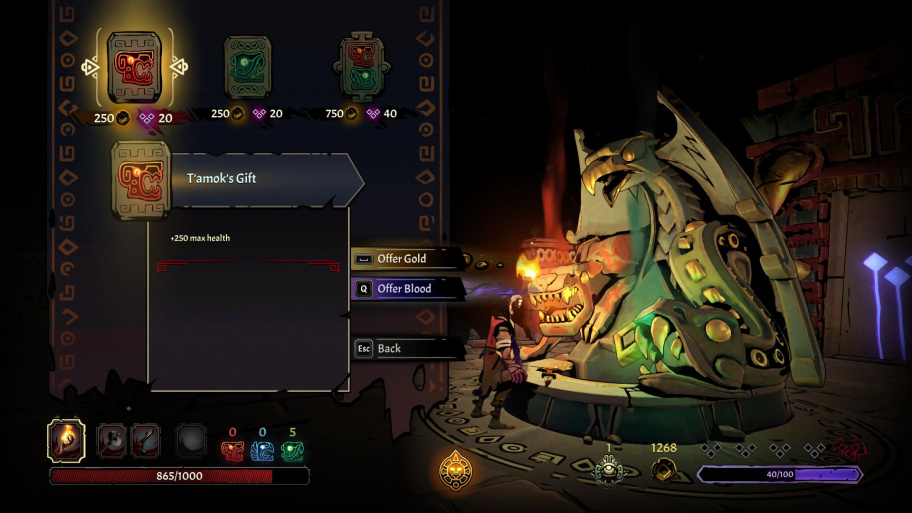 Each deity has its own gift.

From other altars, we buy divine relics with different passive bonuses. From the third, we will acquire new weapons. From the fourth, we choose improvements for it. Plus, there is a blessing system. During the races, we collect skulls, for which you can then buy a permanent bonus. For example, at the start of each race immediately gives 1000 gold and +5 to attentiveness, the other – +5 to agility and an increase in speed with each ideal dodge. There are a lot of options, and some are bought for a rarer currency.

For the skulls, we increase the quantity and quality of weapons offered to us at the start of each race. And we acquire the so-called divine favours – for them, you can update the assortment of swords, axes, pistols (yes, there is a firearm) and relics. 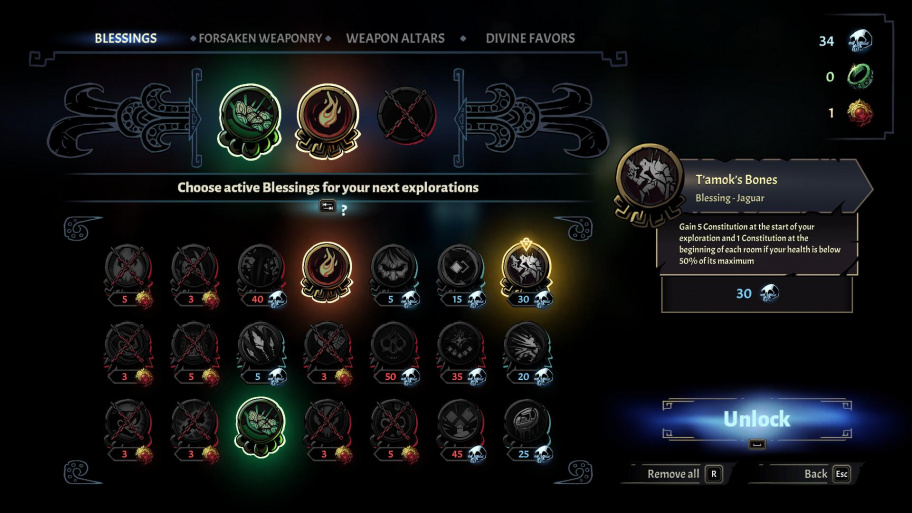 Unlike the Olympian gods, who gave and blessed to help Zagreus escape from his dad, evil and insidious deities in Curse of the dead gods play with us, and therefore not only help. The cursed ancient temple is infected, and with each room passed, the hero’s Corruption level increases. And when filling the scale, the character will receive some random curse. 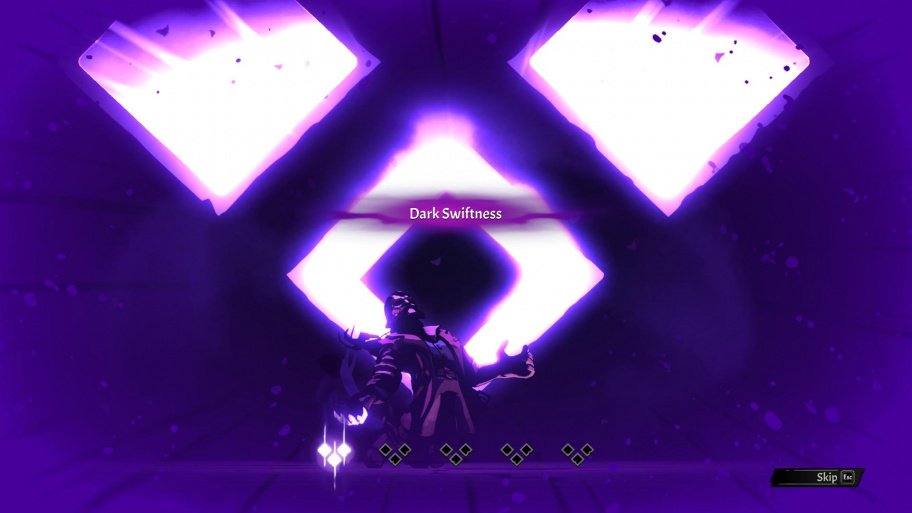 The process is accompanied by the same scene every time.

In just one run, you can earn five curses, and the fifth is very painful. But the rest can be both unpleasant and quite even useful. One turns chests into monsters, but in them, you will find two items at once; the other makes the character lose as much gold as he takes damage, but health damage is reduced by 25%; the third locks all the doors and requires a payment for the passage in money (that is, the Corruption level does not grow), but if there are not enough coins, then you have to pay with your health. 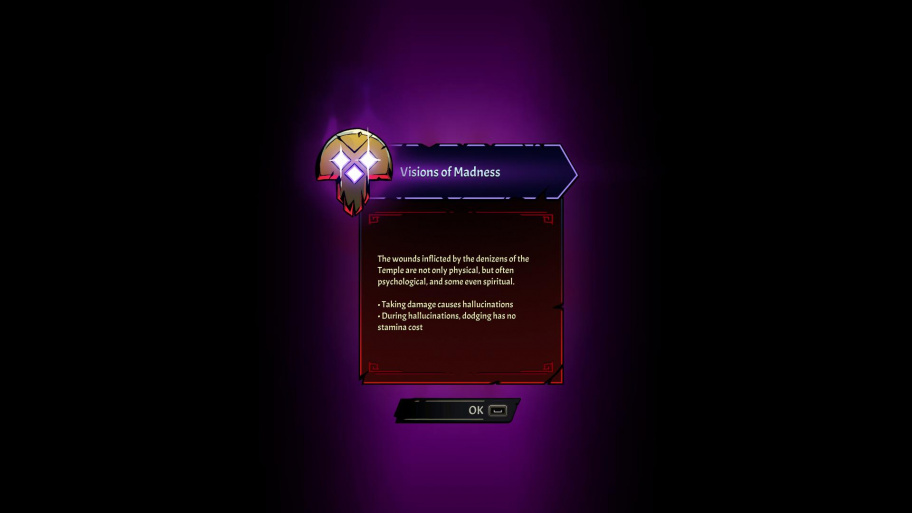 In fact, we are talking about an interesting and sometimes unexpected change in the game’s rules and conditions. AT Curse of the dead gods, there is also a “trick” associated with the fact that the character does more damage in the light, and in the dark, on the contrary, is vulnerable. Therefore, we constantly run with a torch and in which case we try to first set fire to everything that burns and shines, and only then get out the weapon.

The play of light and shadow is amazingly realized.

And now imagine that the next curse changes the rules – more damage, on the contrary, we inflict in the dark, or the game prohibits setting fire to light sources, which are just a bunch of strong monsters.

By the way, it happens that enemy attacks, like some relics or weapon properties, also increase the level of infection. Others, on the contrary, decrease. And on altars, if there are not enough coins, they are allowed to pay in blood for upgrades – this increases Corruption. Finally, again with blood, we heal and restore health in the pools, but each healing session brings us even closer to receiving a new curse. 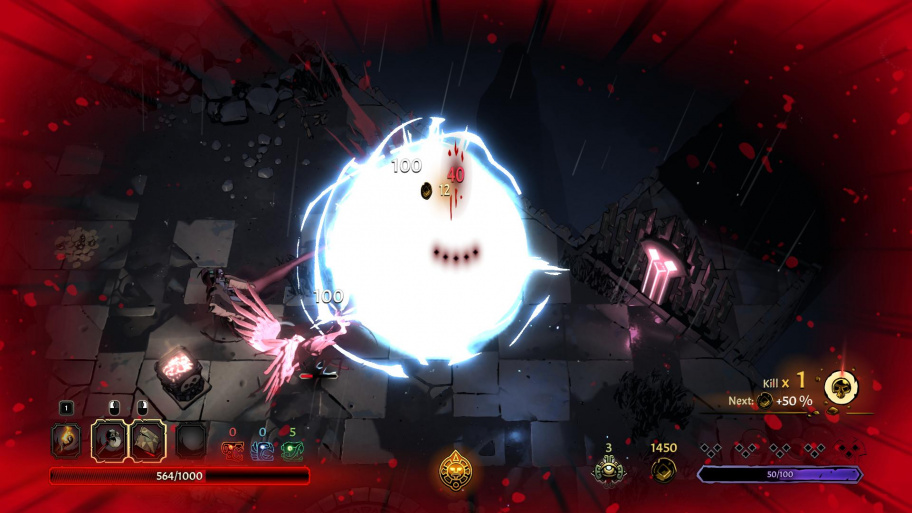 Here the character received both normal damage and “infected” him to the fullest.

Decides not only random

Accidents in Curse of the dead gods very funny and unpredictable. This is both the gift and the curse of almost all roguelikes. But a lot also depends on you here. In fights, all attacks and rolls consume stamina. It is possible to parry a blow in time, which temporarily stuns enemies. And perfect dodging even slows downtime. That is, in battle, skill decides a lot. Especially considering that the opponents are perfect – there are practically no enemies trying to “call” you without using any skills and special tactics. 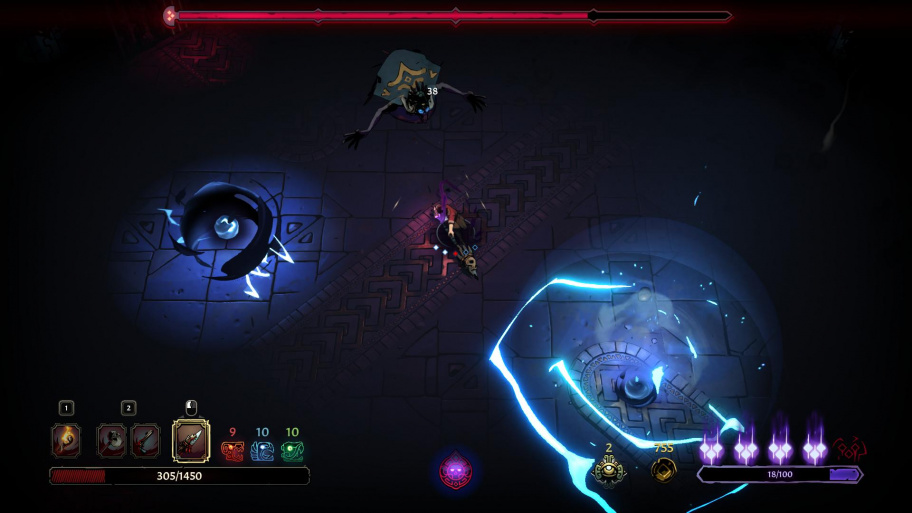 The bosses turned out to be especially interesting and unique, as they should be.

Plus, it would help if you chose the combinations of weapons and properties that give relics yourself. For example, you can take a relic that allows you to drain health from opponents on a critical hit. Accordingly, it is better to select upgrades for weapons to increase the chance of “crit”. Or you may be offered a revolver that deals more damage if daggers are the main murder weapon. 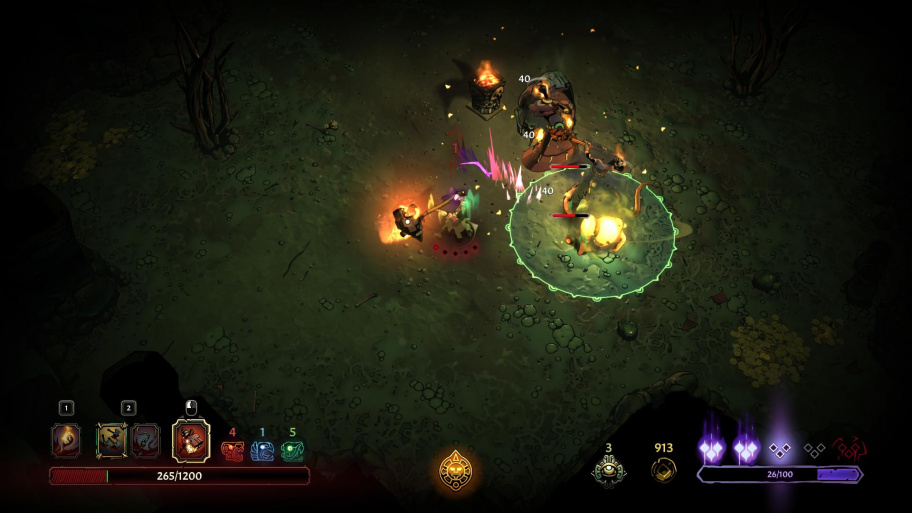 There is also a secondary weapon in addition to the main one, and a separate button is reserved for huge two-handed axes, maces, swords, and spears.

By the way, not all piercing-cutting and shooting objects are available in races initially. By going through sections of the temple and defeating bosses, we earn special rings, and for them, you can then unlock new types of weapons that will drop out in the next passages. 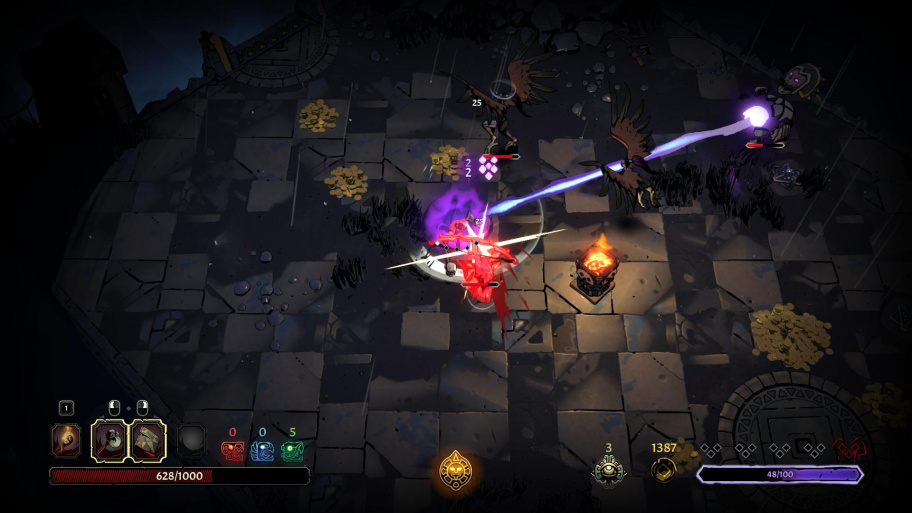 Attacks can be charged to deal more damage and perform special moves.

In any case, the game is addictive. Affects the overall high quality of performance at the junction of the genre’s traditions and their own findings. I especially liked the curse system. Of course, sooner or later, situations begin to repeat themselves, and someone may regret that in Curse of the dead gods, there is no plot – this, of course, is an undeniable advantage Hades… But here, as in Slay the spire, in addition to the usual races, there are special challenges that are updated once a day or two. Try, for example, to complete the game with one bow, each shot from which brings the hero closer to receiving a curse. Or to survive in a situation where death is on the heels, and only each new murder gives a respite. There is no time to get bored here.

Pros: addictive and intense gameplay in the best traditions of the genre; many types of weapons, relics, upgrades and their combinations; vigorous battles in which the mechanics of light and shadow are involved; interesting opponents and bosses; unpredictable system of game-changing curses; unique challenges; gorgeous graphics; solid sound.

Minuses: there is practically no plot; sooner or later, situations begin to repeat themselves.