Many people might get tired of comparing new “roguelites” with Hades, but it is with her that the first associations are associated when looking at Dandy ace… The isometric camera, ability combinations, passive upgrades that carry over from one race to another – there are quite a few things in common. However, we cannot talk about copying – for the first time, both games became known at about the same time. And although Dandy ace in some way it loses to the closest competitor, it remains exciting and just as mercilessly devours free time.

Once upon a time there was the Green-eyed Illusionist Lele (yes, that’s his name), the greatest magician in the world, who tirelessly entertained the audience and was a great favorite of the audience. But at one point, a charlatan stole everything from him, the same Dandy Ace, whose performances were mediocre, but his appearance attracted people. Ace lured all the viewers to him and became a new favorite for them. Lele decided to teach the rogue a lesson and imprisoned him in a cursed mirror – now Ace is forced to roam the corridors of the Changing Palace and survive.

The hero will not have to go crazy with loneliness – he immediately meets the Mysterious type, explaining where Ace even got to, and later he meets two of his assistants. Another character is the smuggler Nnif the rabbit, who has less screen time than everyone else. Well, Lele comments on the races. All the characters, except for women, were perfectly voiced by the same actor (another association with Hades!), but in terms of storytelling before creation Supergiant games the game is very, very far away.

Who could this Mysterious type be?

The characters have very few replicas – the assistants talk about something only at the first meeting, and Ace’s dialogues with the Mysterious type take place only at the entrance to the next corridor. Well, the character exchanges a couple of phrases with the bosses. Lele speaks most often, commenting on everything: the appearance of a new pack of enemies, and the approach of the protagonist to the chest. Here are just these phrases rather quickly begin to repeat – they are pronounced with the same intonation, and jokes, which were not particularly funny anyway, seem more and more ridiculous.

However, to compare plots Dandy ace and Hades it is still not entirely correct, as well as underestimating the estimate due to the level not reached by the developers. Less attention is paid to the narrative here, since the universe is nowhere near as rich as ancient Greek mythology. You don’t need to communicate with the gods – you get the ability by collecting a deck of cards. There is no central location from which you start your journey – instead, between the corridors you visit a kind of circus arena with shops.

How the card will fall

Dandy ace fascinates with the gameplay, or rather, the combat system based on combining the found cards. All of these cards are divided into three categories: blue open up new opportunities for movement, purple allow you to directly attack enemies, and the third give the player the skills to control the situation or opponents. At the very beginning of any race, three different-colored cards are issued, and at first the pool is quite small. As you clear the corridors, you will find schemes for new cards, then turn them into full-fledged cards in the store (spending crystals dropped from opponents for this), and thereby replenish the list of potential skills in the next run. 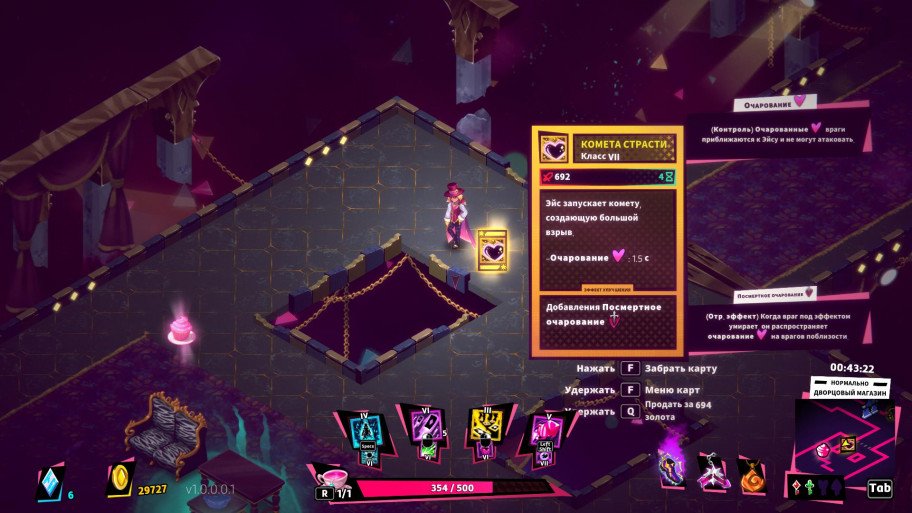 There is no inventory for extra cards – either “put on” them or sell them on the spot.

But the most interesting thing is that new cards can make old cards that were available from the very beginning stronger. Here, each main card can have one auxiliary card – only you in your inventory decide which one to put. For example, you were given at the very beginning “Five Cards” – a purple skill, upon activation of which Ace throws five magic cards and deals damage with them. And later you found the map “Venomous Shroud”, releasing a poisonous cloud. You can use these abilities separately from each other by pressing different buttons. And you can make a second auxiliary one, and in this case, when using the “Five of Cards”, the hero will throw poisoned cards, causing additional damage for four seconds.

Thus, cards that are not very useful in the main cells can come in very handy. Don’t want to use fireworks, the power of which depends on how long you hold down the button? Put it in the bottom cell, and make something more convenient with your main skill – as an option, “Explosive cards”, which remain on the ground and explode when enemies approach. With fireworks after the explosion, enemies will burn for a few more seconds, continuing to lose health. Or make an auxiliary card of some kind – then you will receive acceleration after a successful attack.

There are also maps for melee.

The found schemes allow you to create cards with features that have not been seen in the game before. Abilities appear like summoning three fairies to defend against projectiles, or creating a shield that explodes when destroyed. But schemes exist not only for cards – there are also trinkets here that also open up new possibilities. Increasing the damage dealt before the first wound, decreasing the attack power of opponents, reducing the time it takes to restore cards of a certain color – if you have a particularly successful build, you can make it even cooler by choosing the right accessories.

The emergence of new opportunities for experimentation makes the gameplay fun. Later, access to the same Nnif the smuggler and his machine guns, placed along the corridors, opens up – he can use the accumulated gold, which, like crystals, drops from enemies, to increase the ranks of existing cards. Yes, cards become obsolete over time – coming to the first boss with cards of the first rank will be suicide, because they do much less damage than the third or fourth rank. It is necessary either to save gold, or to pick up other cards – it all depends on the situation. 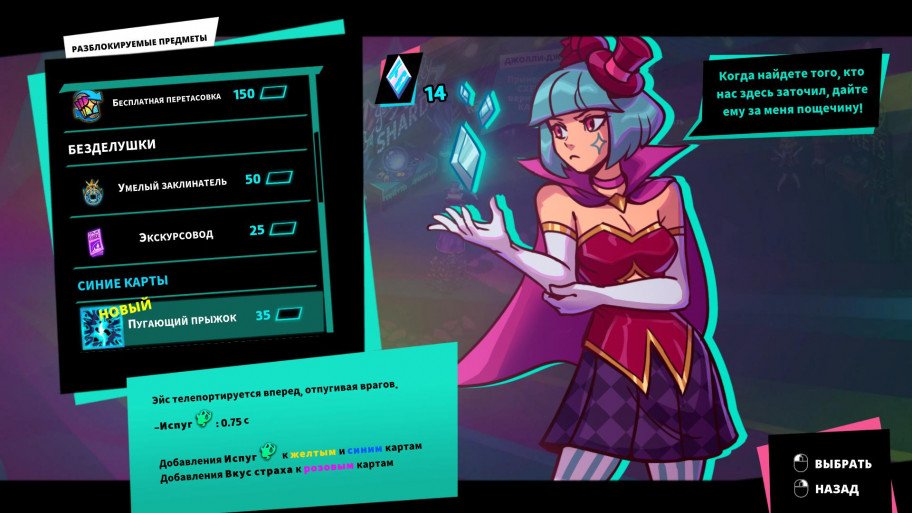 Unspent crystals will disappear after death, so it is better to invest them in something – it is not necessary to immediately fill the scale to the end.

Permanent improvements for crystals simplify the gameplay – if you don’t want to buy them, no one forces you. You can take an additional first-aid kit, gain the ability to sell unnecessary cards immediately after receiving them, or shuffle the deck if completely stupid stuff falls out. Nnif the Smuggler can permanently improve the rank of starting cards. In general, the longer you play (and the more successfully you complete the corridors – after death, all the currency is taken away), the more interesting it is. I haven’t mentioned the keys yet – in the corridors you constantly come across locked doors of different colors, and as soon as you find the keys, you open new paths to additional locations, and bonus chests, and shops with valuable things.

Perhaps the combat system here is not as spectacular as in Hades (you can’t put someone into a column and bring it down on his head here), but there is a charm of its own. The most successful run I had was with a deck, where one card left a cloud with damage when dashing, another allowed you to throw poisonous cards, the third made enemies vulnerable when cards exploded (that is, they received more damage for a couple of seconds), and the fourth released an incendiary fireworks together with bursting bubbles. As a result, the unfortunate enemies tried to catch up with me, while I overwhelmed them with magic and applied three or four effects. I immediately wanted to go through the game again. 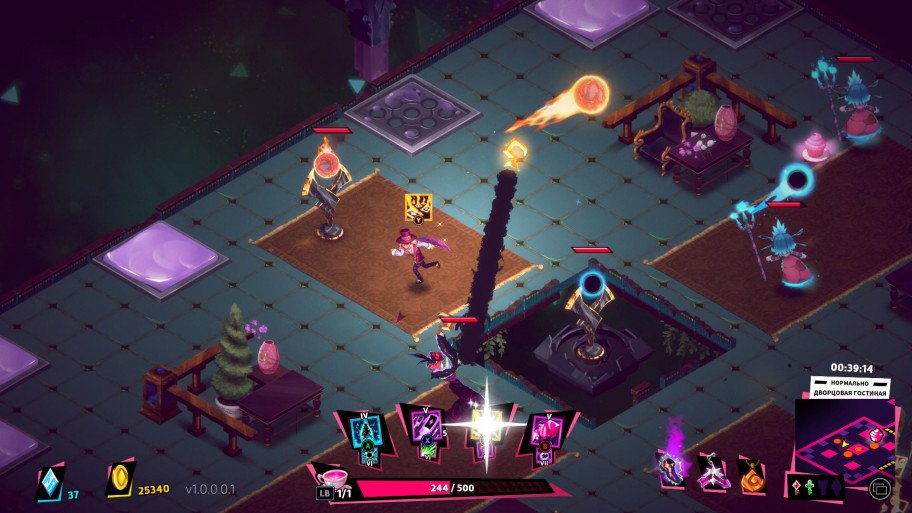 In most cases, you can run away from enemies into the cleared area, but sometimes the player is locked with them in a small room.

The mysterious type, of course, comments on your first victory over the final boss and at the next meeting warns of further difficulties, but here is a comparison with the narration in Hades again it turns out not in favor of the novelty. But the gameplay of the game changes – if at first only one of the four difficulty levels (normal) is available, then the game switches to difficult and so on. The health of enemies increases, the damage is also increased, but you get more shards and you can unlock new options sooner. Plus, new opponents are added – they won’t force you to bother with the same ones.

The only serious gameplay gripes with are the bosses. First, they sometimes attack more often than you have time to react – all skills, including dash, have timers so that you cannot endlessly “spam” them. And in some cases, it is simply impossible to bounce off an attack in time, especially if this attack covers a large area in the arena.

Secondly, bosses have a lot of health, so it is advisable to pay more attention to combinations – in order to set fire to opponents, and poison them, and so on. Because of this, the possibilities are slightly limited – for example, repulsive abilities become useless on bosses, although in other situations they can come in handy. Hopefully, the boss balance will be improved in upcoming patches.

There are several types of dashes in the game – one of them creates a phantom that teleports back to the owner and deals damage.

The Brazilian gaming industry is surprising this month – I wrote about an amazing platformer the other day Kaze and the wild masks, and now the “roguelight” from sunny São Paulo turned out to be successful. He is nowhere near as ambitious as Hadesbut no less exciting. Although he is hardly destined to gain the same great popularity, those who want to play something like that should definitely pay attention to Dandy ace Attention. Especially for the sake of the combat system and all sorts of combinations of abilities – the longer you play, the more interesting “chips” you will learn.

Pros: an excellent combat system that allows you to experiment; new maps, trinkets and features make the gameplay exciting; pleasant visual style, with which a mountain of special effects does not turn what is happening into a mess; convenient control.

Minuses: the narrative is not given as much attention as we would like; annoying remarks of the main villain; slightly unbalanced bosses.