Recently, we have seen a lot of decent Russian games in more or less classic, role-playing performance – in isometric view, with quests, non-linearity and turn-based battles. IN Demon Skin there is nothing like that – this is a platformer with traps, combo attacks, pumping, searching for artifacts and equipment. Can it be called decent too? We talk in more detail about the advantages and disadvantages of the debut project of a small studio Ludus future…

The plot is banal, but with a twist

History in Demon Skin really looks clichéd. There are demons, there are representatives of the Wanderer Order, who fight these demons using their divine powers. And we play as one of these daring heroes. The highlight is that our character, a stern and tall man who looks like an overgrown Kratos, saw how enemies were conducting a blasphemous ritual, accidentally became his victim and turned into a demon. Now he looks like a monster, and he has lost almost all his strength.

Why aren’t we surprised?

In the future, there will also be seemingly banal moments when you want to “smash your face with your hand” – for example, the villain we defeated, letting out a sigh, naturally agrees to suggest what to do next, but this, thank God, turns out to be a trap. So the script Demon Skin still not hopeless.

The hero’s task is clear – to return the past, and for this you need to find an important artifact and kill many enemies and bosses living in different locations – here you have snow, forests, swamps, dungeons, and some kind of arenas and throne rooms. 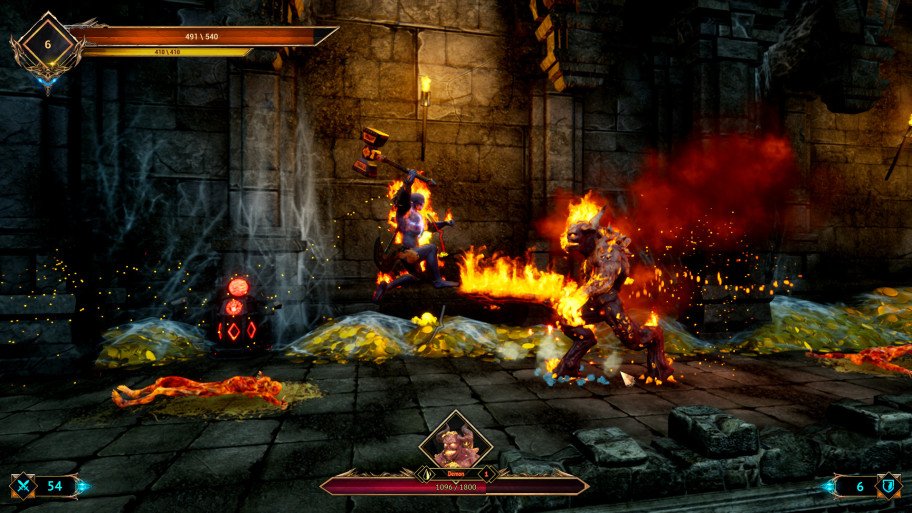 From ice to fire!

The game is very short

True, all this fits within three hours. And the story is interrupted almost in mid-sentence. That is, another oncoming aunt tells us what needs to be done further so that she can help, we impatiently intercept the weapon … And at this moment the credits begin to creep across the screen.

There are two options – either the authors split the finished game into two (or maybe more?), Forgetting to attribute to the title “Episode 1”. Either they just did not finish the project and decided to release it in this form in order to raise money for the continuation – well, or evaluate the reaction and understand who needs it at all. In any case, given that the game is sold on Steam for 435 rubles (not much, but full-fledged releases are offered for this money, not stumps), the decisions, let’s say, are ambiguous. 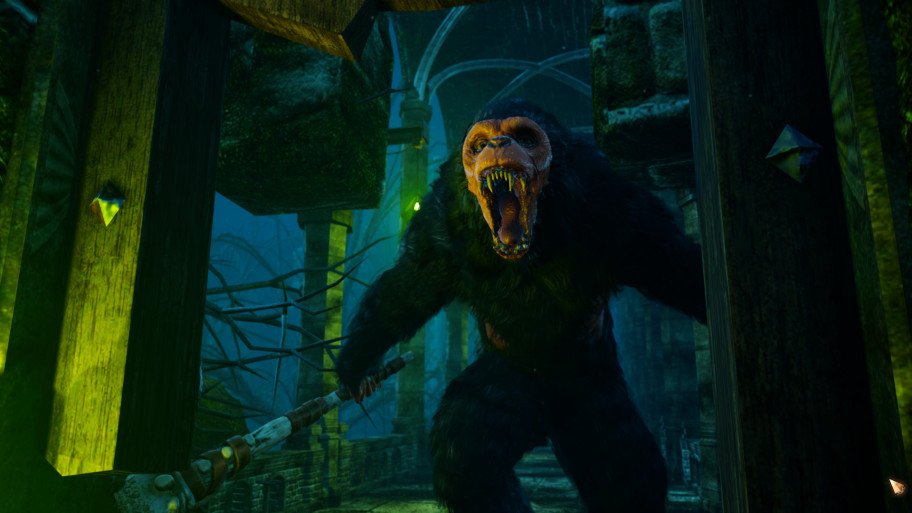 Some bosses do not fit in with the image of demons at all – rather, with monkeys.

By “unknowns” we mean the three directions of blows that enemies can inflict – from below, from above, directly. Not that they were completely unknown – the game tells you how the enemy will attack now – but in the heat of battles it is not easy to navigate at first. If you managed to react and get into the right stance, then the character will block the blow himself. 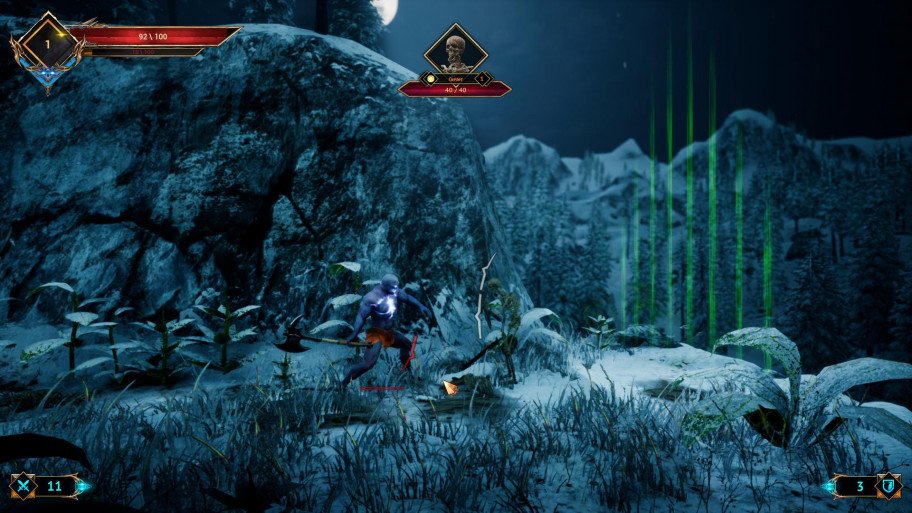 True, one such blow cannot kill.

Many of these cool things are hidden in chests, and those, in turn, are hidden in the environment. You have to look for secret locations, cutting through suspicious walls.

You need to knock down the lock from the chest.

No system of accumulation and loss of souls in Demon Skin not. Everything is more commonplace – by defeating enemies, we earn experience and gain levels, which allows us to invest in increasing damage, health or stamina. At the same time, as the hero is pumping, the outwardly becomes much more brutal and stronger, returning his strength. 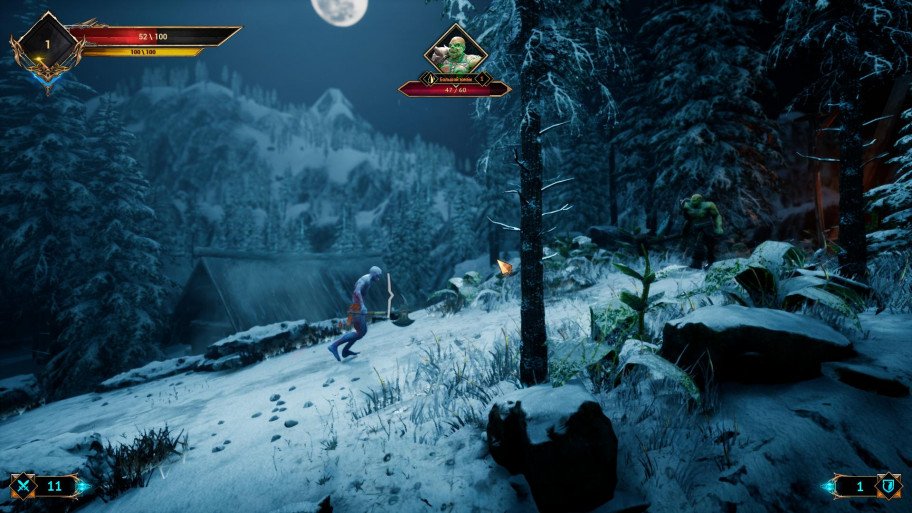 The wanderer in his new guise looks like some kind of dead man and a zombie.

But even in the later stages, the character still quickly fizzles out. As in many similar games, in Demon Skin it is important to monitor stamina – it is spent on evasions and attacks. And so that the exhausted character is not exposed to the blow (tired, he moves very slowly and swings, and you cannot cancel the swing animation), you need to retreat in time and take a breath. 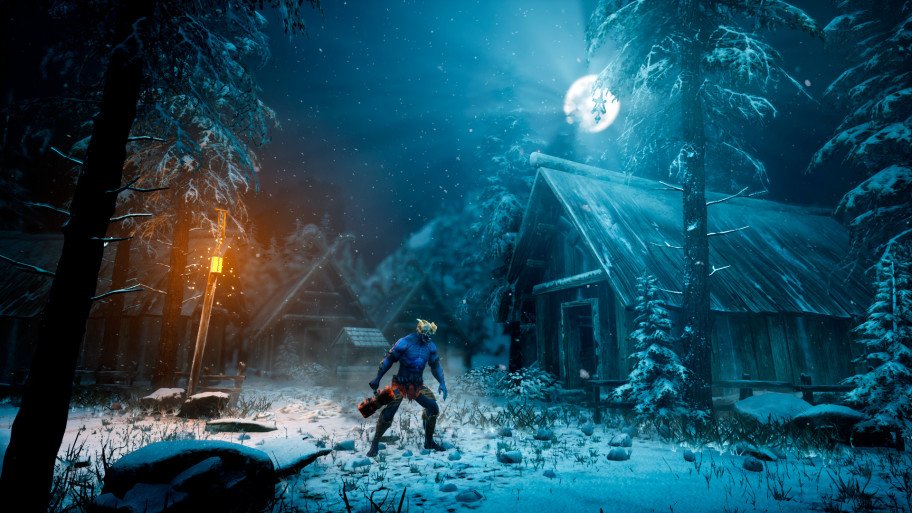 Closer to the finale, our hero becomes already like that.

But almost as much time as fights is spent on platforming and overcoming traps, which literally lined the entire three-hour journey of the Wanderer. A step to the right, a step to the left – either you will fall on the stakes, or wind it around the rotating blades, or the blades will deprive you of your arms and legs, or you will crush them with a barrel. 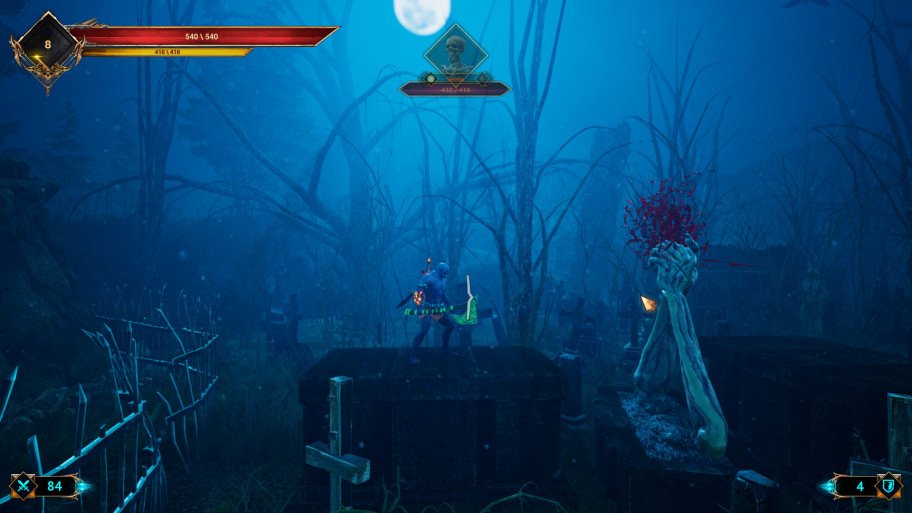 There are even such traps.

On the one hand, this is good and makes the gameplay more varied. But on the other hand, there are big problems with management: it is, to put it mildly, ill-considered and inconvenient. Even changing and ditching weapons is not easy. You also have to make unnecessary body movements so that the character turns around and starts hitting or jumping in the other direction. This is especially infuriating during action-packed situations, when you have to run away and jump for a while – and this happens here all the time. Moreover, the checkpoint bonfires (where we are only saved), as a rule, are placed far from each other.

And I would like to run faster, but the character cannot.

There are also purely design mistakes, when, for example, we simply do not see where to jump and what awaits below in order to accurately calculate and not die. All this makes a fairly hardcore game even more difficult – although, if we talk about platforming and management, this is not a merit, but a flaw of the authors. 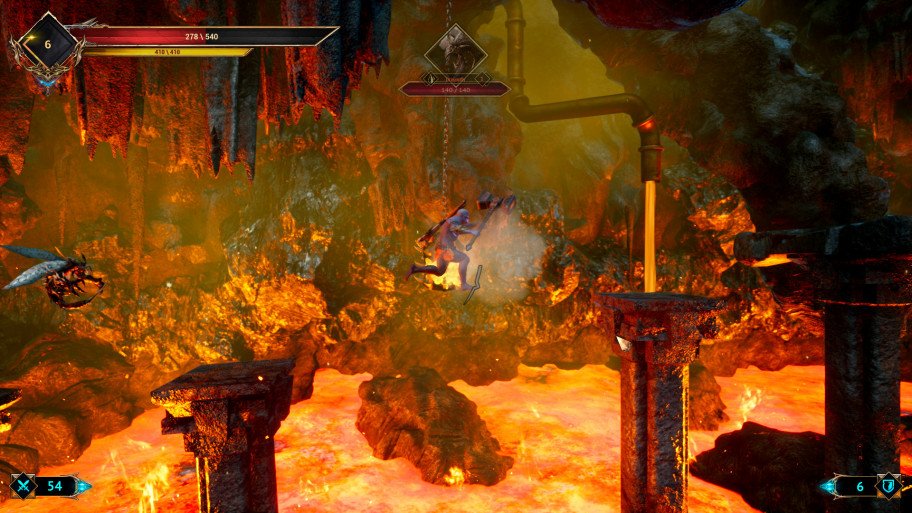 Outwardly, the game looks quite decent.

On the other hand, if you get used to it and take a closer look, you can find certain vulnerabilities in the behavior of monsters, using which you will even go through fights with many bosses without any problems. For example, you press the enemy and wait for him to hit, turn on the required stance and immediately hit back – in this case, your attack will be 100% unblockable. And so sadly to repeat until the enemy is completely destroyed. 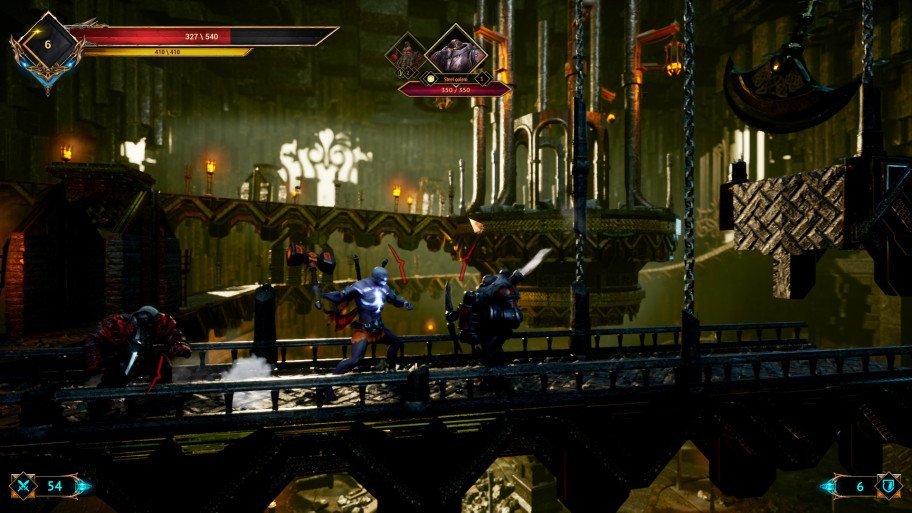 Often, monsters can fight each other.

One could say about Demon Skin so – short, banal, inconvenient, but addictive, there is a challenge and its own atmosphere. The game is really not hopeless, it has its own style and spirit of a real hardcore old school – the authors do not hide that, among other things, they were inspired Severance: Blade of Darkness…

However, let’s put it this way, shifting the emphasis: the game is able to tighten, it has its advantages, but implementation and design suffer – because here it is short, banal, sometimes ill-considered and inconvenient. Considering that the development was very difficult (initially it was a single project, then concepts changed, campaigns on Kickstarter failed), all this can be understood and forgiven. It’s a miracle that Demon Skin in principle, it came out and you can play it. But it would be much more productive to wish the authors to draw conclusions in the sequel, since they are so boldly hinting at it, the potential of the project has clearly not yet been revealed.

Pros: dynamic gameplay; interesting and challenging battles based on alternating stances and strikes from three directions; an abundance of challenges, bosses and traps.

Minuses: the game is short and ends in mid-sentence; inconvenient management, especially in platforming; there are design mistakes and holes in the AI; in some places too amateur voice acting (with the exception of the main character).