Loot boxes with random rewards have long been unavailable in Fortnite and the Rocket League. For example, in Fighting the Storm, they have been replaced with X-ray Llamas, which show players in advance what they will receive upon purchase. However, if you once managed to purchase at least one loot box before they were removed from the above games, you can count on the following gifts:

The reward is only given for games in which purchases were made. The currency is promised to be credited within the next few days. 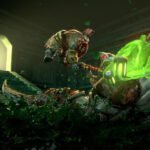 Played the release version of Warhammer: Odyssey – has anything changed at all?