Google is about to release its next major Android version – Android 12 – later this year after a series of preview builds and developer beta builds likely to start rolling out later this month. Before the stable release, Google shares documentation and source code with its main partners to give them time to prepare for release. An early draft of a document (presumably) that Google made to summarize the changes in Android 12 has leaked today. Screenshots have been extracted from the document showing the new user interface and functional changes. Although we cannot fully confirm these screenshots’ authenticity, we see some evidence in them that the document in question is real and that these screenshots are indeed taken from the specified document. This is what we see right now.

One of the alleged screenshots of Android 12 demonstrates the new interface of the notification bar… The opacity is gone and replaced with an opaque light beige background, although the colour probably depends on the current theme and/or if dark mode is enabled. The separation of the chats section from the rest of the notifications still exists, and the rounded corners of each notification are now more pronounced. The number of quick setting tiles that appear when partially expanding the notification panel has been reduced from 6 to 4, making each icon larger. The date and clock position has been reversed, and new privacy indicators have appeared in the upper right corner.

By the way, it looks like what Google is about to add to Android 12 new privacy features… In the new version of the operating system, you may receive an alert in status bar indicators when an application is using a camera or microphone. When you click on these icons in the status bar, a pop-up window may appear at the top of the screen indicating which application (s) uses the camera or microphone. Google has been testing these additional privacy features for over 2 years now, so it would be nice to see how they work in Android 12 finally.

Associated with this change is the alleged update of the “Privacy” group of settings in Android 12… New privacy settings may contain toggles to mute the camera and mute the microphone completely, in addition to toggling location access. You can already disable all sensors on your device using the Sensors Off quick setting tile, but this tile can only be displayed after enabling developer options. Android 12 can make these sensor switches more accessible to users by placing them in privacy settings.

Finally, we have what appears to be another addition – this time to the Android widget selection… When Apple recently added new widgets to iOS, we argued that they are, in a way, better than their Android counterpart. While we don’t know if Google is planning an overhaul of the widgets, it looks like the developers are planning to make some improvements. In a few screenshots from Android 12, we see (presumably) a new Chats widget that can highlight recent messages, missed calls, or activity statuses. The widget shown is small and seems large enough to accommodate displaying only one message/call/status at a time at its smallest size. 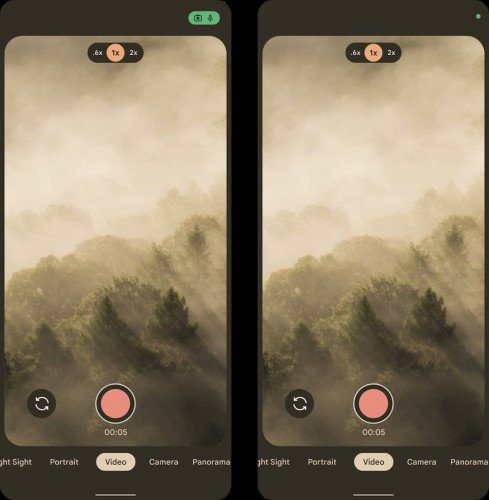 One of the documents that we also looked at as a result of the leak shows that Google plans to make “conversation widgets” A must-have feature for all devices running Android 12. These widgets provide access to Contact Shortcuts, which contain an avatar, name, notification content, and status information, all defined in the PeopleManager class.

According to the screenshot of the document we were looking at, Google also plans to include Android 12 camera and microphone indicators… These indicators should be prominently displayed at the top of the screen, have the same colour throughout the ecosystem, and always be accessible and visible when using a camera or microphone. We won’t know what other changes are coming until we get the full Android 12 Compatibility Definition Document (CDD). We’ll have to wait a little longer.

If we receive additional evidence to prove these Android 12 screenshots’ authenticity, we will report it in a separate note. We also asked Google to comment on this leak and will be sure to update this article if we get a response.