One day before Samsung unveils the new Galaxy S21 series at its traditional Galaxy Unpacked 2021 event, the manufacturer has officially announced its cheapest 5G phone of the year, dubbed Galaxy A32 5G… It doesn’t look like the Galaxy S21 at all, but it got that very different exterior to stand on a par with other budget Galaxy devices.

Galaxy A32 5G looks very familiar from the front because it has a 6.5-inch HD + Infinity-V display with rather thick frames around and an even thicker chin. However, this device uses a new design for the rear panel and camera module, and it looks very different from what we saw from Samsung. Each camera has its own cutout, and they are not combined in a large camera module housing that would take up most of the rear panel.

The case back is supposedly made of a polished plastic imitating a premium glass coating called 3D Glasstic. The phone comes in four color options: Awesome Black, Awesome Blue, Awesome Violet, and Awesome White. The case’s size is 164.2 x 76.1 x 9.1 mm, and the weight is 205 grams.

While Samsung hasn’t directly confirmed this, all the evidence so far indicates the Galaxy A32 5G is based on a chipset. MediaTek Dimensity 720 with two Cortex-A76 cores running at 2.0 GHz and six Cortex-A55 cores running at the same frequency. 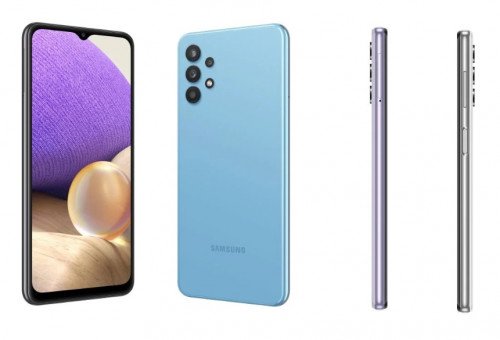 The processor works hand-in-hand with 4/6/8 GB of RAM, and the phone comes with 128GB of internal storage, expandable up to 1TB via a microSD card installation. Biometric authentication is performed with a side fingerprint reader. The device is powered from a 5000 mAh battery with support for 15W fast charging.

Samsung hasn’t disclosed any details on the pricing or availability of the model yet, but we suspect more information will be released after Unpacked 2021. We’ll be sure to let you know as soon as we learn more about the Galaxy A32 5G.