It’s About Time for PlayStation 5

Briefly about the game

It is a short introduction for those who do not know what Crash Bandicoot 4: It’s About Time is. This is the fourth numbered part of the famous bandicoot series, which is a direct sequel to the Crash Bandicoot N. Sane trilogy. In the story, Dr Neo Periwinkle Cortex and Dr Nefarius Tropi managed to get out of a temporary trap and now threaten the entire metaverse.

The gameplay of Crash Bandicoot 4 has remained true to the original, but at the same time, has been replenished with a large number of new mechanics. In the main campaign, one can choose one of two characters, but some missions are completed for others. Players can switch between two modes of passage: “Modern” with an unlimited number of revivals and “Classic”, in which, as in the first parts, players start from the very beginning of the level if they lose all “lives”. There are also local multiplayer challenges for playing on one screen.

Of course, you shouldn’t expect an incredible leap in graphics from the PS5 version of Crash Bandicoot 4. It’s still a cartoon platformer, so ray tracing and other technologies are not particularly needed here. Nevertheless, the game’s picture has become really nicer and more detailed, and playing with the doubled frame rate is much more pleasant.

As for the download time, it has been significantly reduced. Now the levels are loaded literally in 5-6 seconds, which is about 3-4 times faster than before. The SSD continues to perform well in games adapted for the PS5.

As in Devil May Cry 5: Special Edition, which we wrote about earlier, Crash Bandicoot 4 was created for the last generation, so the developers did not consider the features of Dualsence. The capabilities of the new controller were used where it is possible. Basically, all the credit goes to the right trigger – it reacts to various additional abilities, such as using Tona’s grapple. The function does not inconvenience the gameplay and, at the same time, is a good addition. The rest of the controls remained unchanged, so you don’t have to get used to it.

Collect all the trophies!

Another feature of the PlayStation 5 version of Crash Bandicoot 4 is the Activity Card feature. Many people love to play until they get Platinum. It is for such trophy chanters that activity cards will be beneficial. They allow you to watch small videos with the passage of certain moments without leaving the game. Moreover, you have the opportunity to immediately go to the level at which you did not receive a certain trophy using the cards.

The Activity Card also includes one more small but useful function. With the help of cards, while in the game or even in the main menu of the console, you can implement a specific test. For example, to “Trial against time” or “Videotape with memories.” You can also quickly jump to the last uncompleted level of the story campaign. As they say, a trifle, but nice.

The developers of Crash Bandicoot 4: It’s About Time did not add new content and did not make drastic changes for the PlayStation 5. They did exactly what was expected from the free update: tightened up the picture and added some interesting “chips”. If you’ve played on the PlayStation 4 before, you can transfer your saves without any problems, and for new players, this is a great reason to start getting to know the fourth part.

Protect The Realm: The early launch of the card game has started, what’s new? 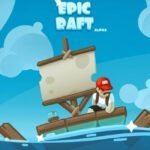 Epic Raft is released on iOS: man against a malicious zombie shark