Lust from Beyond: Review

History in Lust from Beyond to some extent is a direct continuation of the plot Lust for darkness… Everything still revolves around anxious cultists who opened the way to the otherworldly world of lust and pleasure Lust’Ga, and one of the key roles in the story is played by Amanda – the very girl we saved in the first part.

The main character, however, is new – antiquary Victor Holloway, who, because of his sexual visions (and he naturally sees Lust’Ga), first hurts his beloved girl, then goes to see a doctor, and eventually goes to hell. Namely, in the den of cultists who kill and rape those who have a connection with the god of pleasure – and not only them.

A girl with a guitar … We’ve already seen this somewhere.

And this is only the beginning of a great story, in which there will be salvation, and betrayal, and shocking discoveries, and the decision of the fate of the whole world, and much more. Yes, there are the usual clichés – a hero who has been chosen by someone and for something, psycho-cultists, stabs in the back from those from whom you do not expect this at all, and so on. 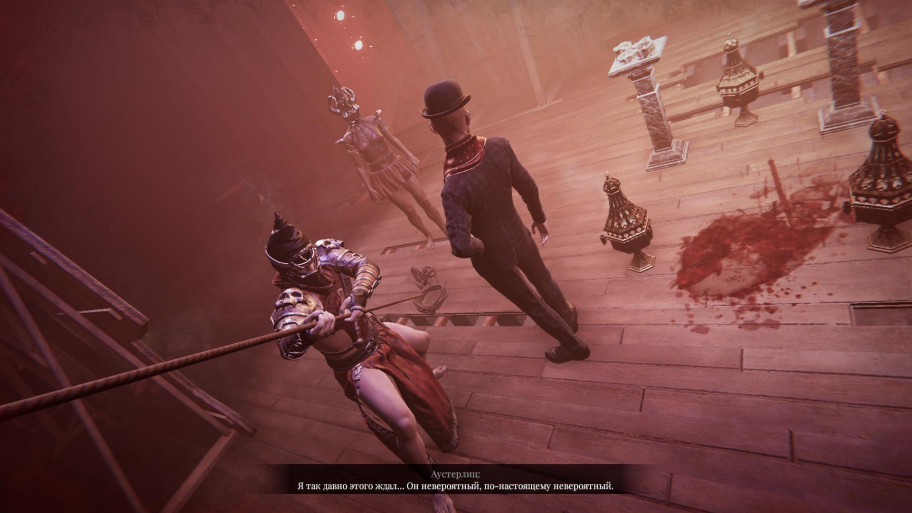 Oh, Victor will have a hard time …

But, firstly, from this point of view, in general, all stories in literature and art are about the same thing – about love, death, betrayal and jealousy. Secondly, the main thing is what kind of story is woven from these clichés. And in Lust from Beyond it turned out to be quite interesting – there are enough unexpected turns and tense scenes to keep a close eye and wait to see how it all ends. 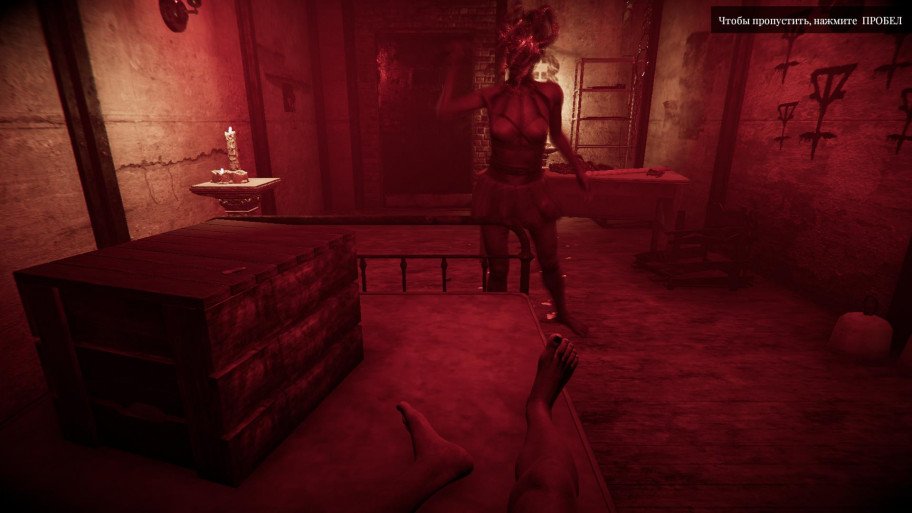 It will not do without lashes.

Finally, compared to Lust for darkness the sequel script has more scale, interesting personalities, various locations, direction and non-linearity. Moreover, more or less minor characters are also given enough attention. They not only play the role of a reference book giving out information about the world of the game – they are often well-written, living people with their own stories.

And we ourselves determine how these stories end. Indeed, in addition to the key choice that affects one of the two main endings (and the fate of all mankind!), There are also decisions that change the fate of other characters. Whether to kill the doctor or spare, whether to help the girl who begins to doubt the values ​​of the cult and the plans of its leader – the consequences of these and other decisions will be told in the text already in the epilogue. 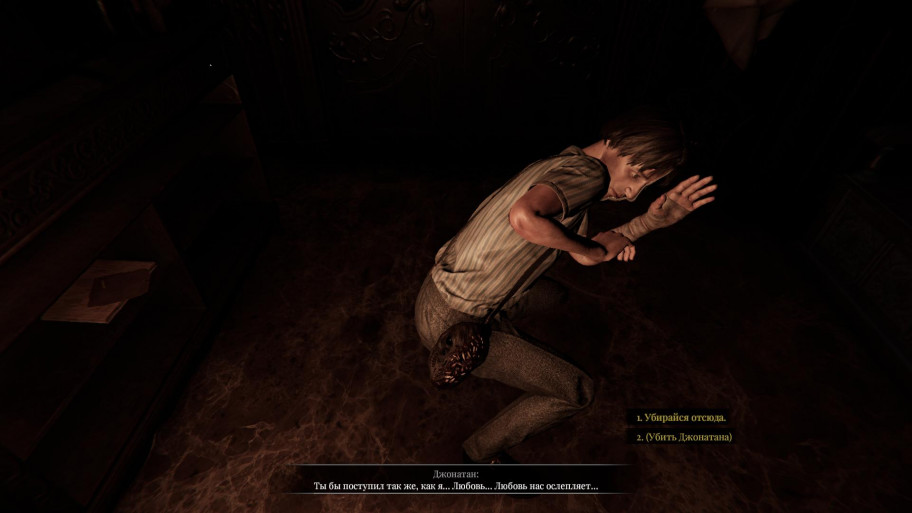 To be honest, it was very difficult not to kill him.

Besides, in Lust from Beyond more style and lovecraft. Yes, Lust’Ga still resembles the pornographic version of the Cthulhu myth illustrated by the concerned version
Giger (Hans Giger), drawing phalluses and vaginas to everything. 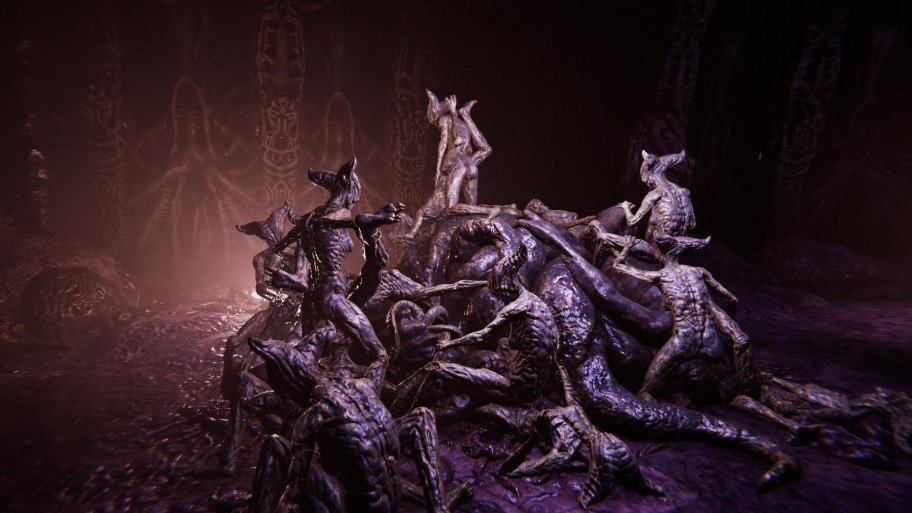 On paper, this is more disgusting, and the game is a mixture of disgust and admiration. As the scale of the script increased, the quantity, quality and variety of otherworldly locations increased – and in terms of art design, architecture and style, everything is very good there. 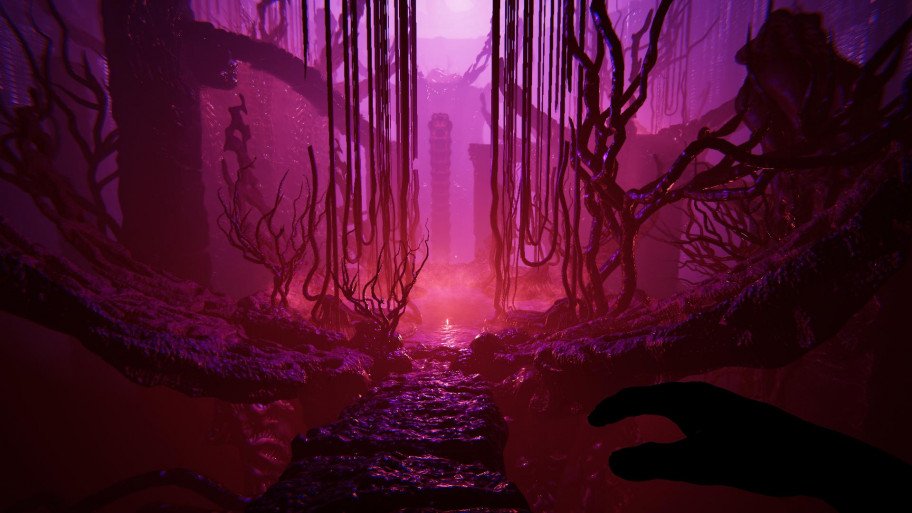 Isn’t that divine and painful at the same time? 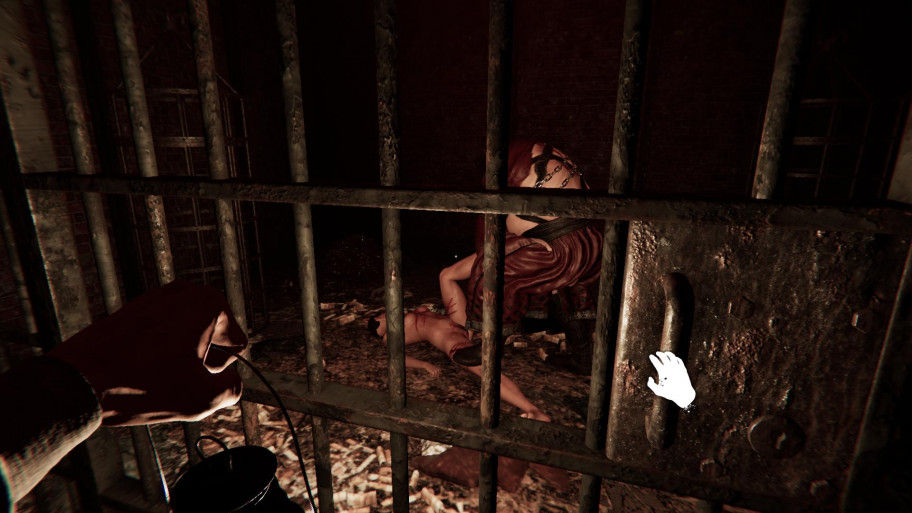 There is no time for sex. 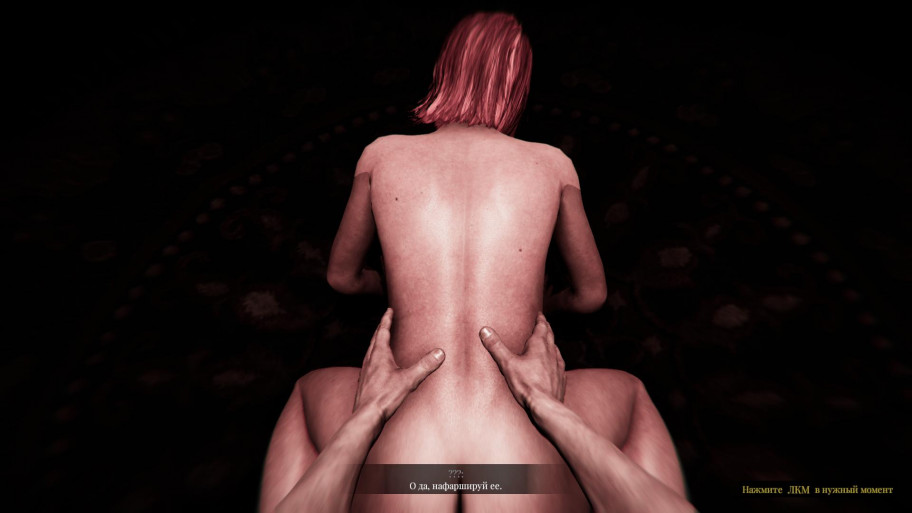 When the hero himself “makes love”, as a rule, a simple mini-game turns on.

Not scary, but interesting

However, in fairness, I will clarify that we are talking more about a psychological thriller – a horror in Lust from Beyond frankly not enough. There is enough tension and atmosphere, there are scenes of dismemberment and in general a lot of body horror, but you will hardly be startled and afraid, shouting good obscenities and grabbing at validol. 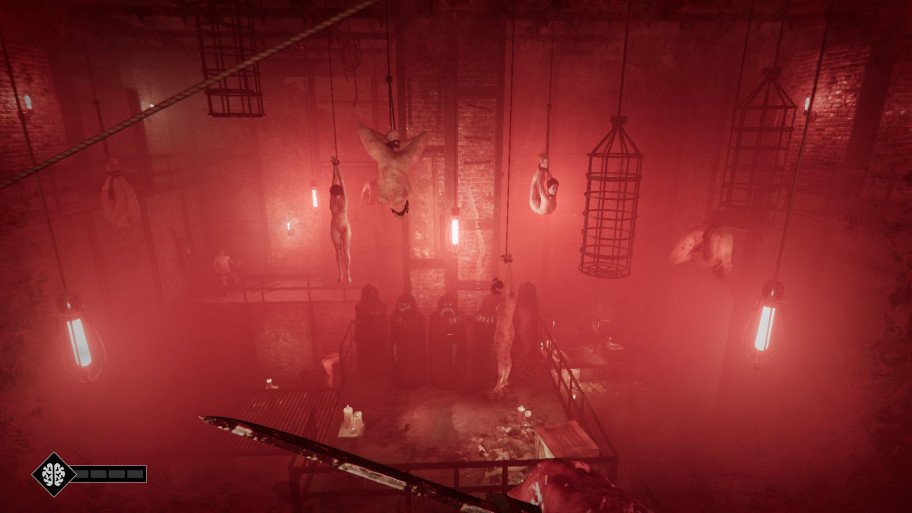 At such moments, it really becomes uncomfortable.

Even such a simple but effective technique as a screamer is rarely used by the authors. Therefore, the warning that it is better to play at night and with headphones on looks the same trick as rumors that there is someone at every step in front of everyone’s eyes … This is not bad – the game turned out to be quite tense , with its intrigue and thriller atmosphere. You just don’t need to position Lust from Beyond
exactly as a horror. 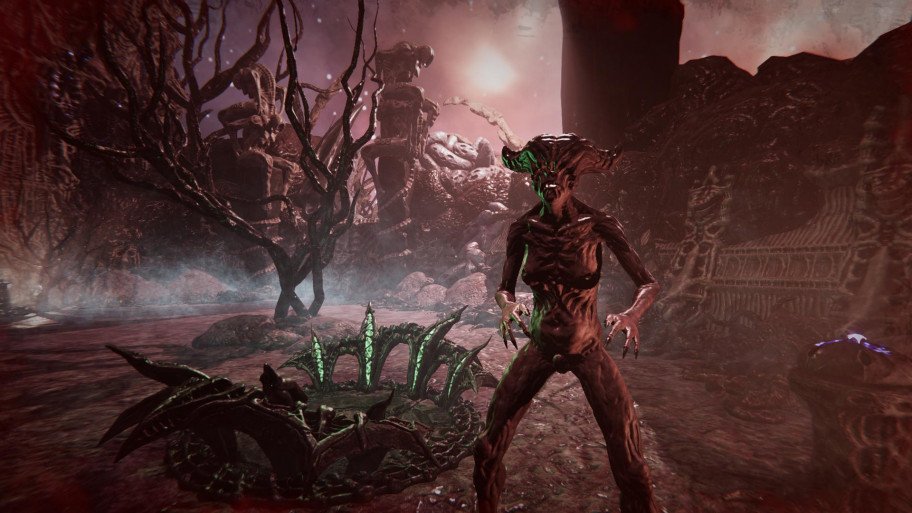 And at such moments you want to run away as soon as possible.

On a string to the world

Some believe that the game itself, that is, the gameplay, is not enough here. But in fact, the gameplay after the plot added in scale and variety – if, again, compare with the first part. 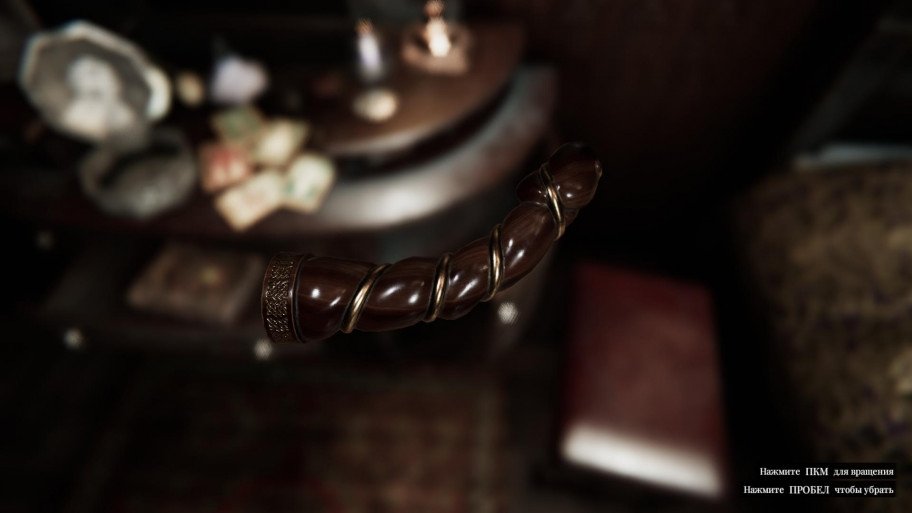 Only the items here come across specific.

Puzzles are not very difficult – and, as a rule, there is a visual clue to them. At the same time, as in the first part, there are many repetitions, when we are constantly looking for different stones and artifacts so that they open the passage further. 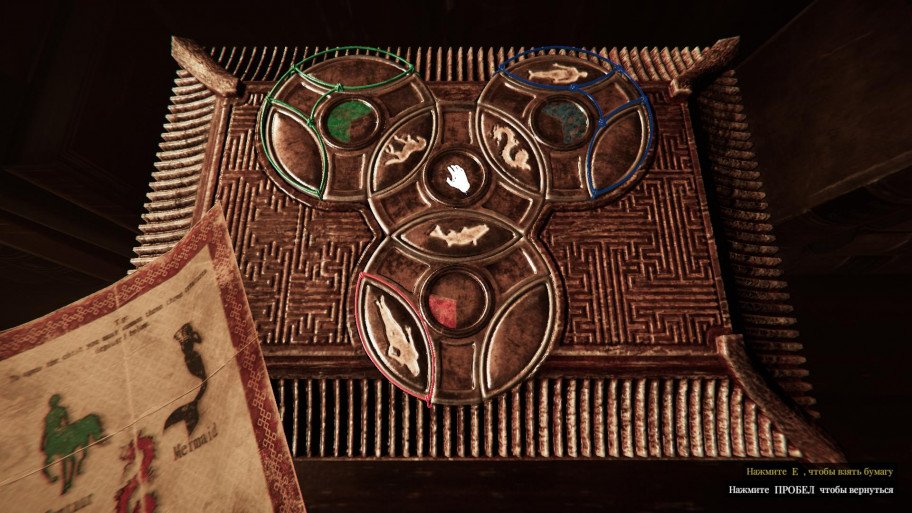 A note with tips can be placed next to it for convenience.

Stealth is in place when we sneak past the monsters (although you can try and escape). The main thing is that the legs obey – the main character can get nervous and panic at the sight of scenes of violence. If we do not drink a sedative in time, then we will lose control of the character, and then he will hardly get out of the corner of the room for five minutes.

And to all this, new mechanics were added. Now we can fight enemies using a knife or a revolver. There are also fights with bosses, “sharpened”, including for action and shooting. 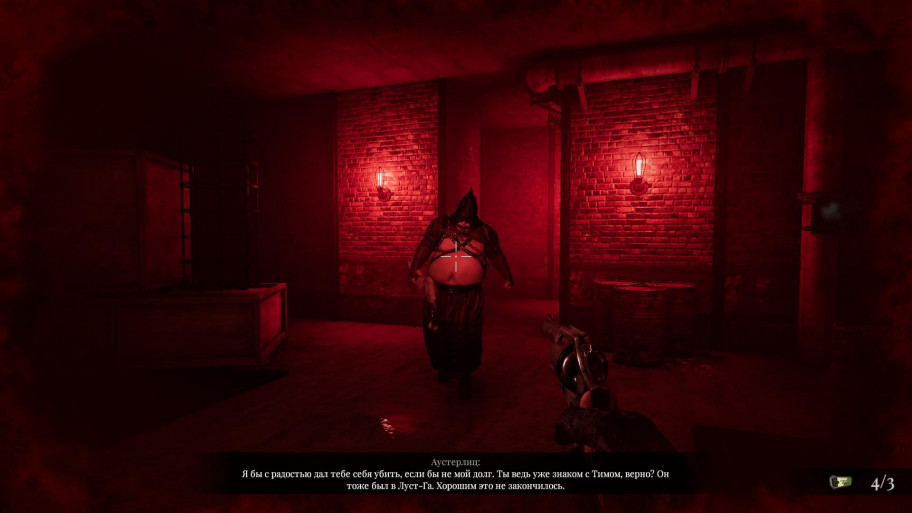 This boss is difficult to defeat by shooting in the forehead – you also need to use the environment.

We also learned to use simple magic in order to activate crystals with the help of special energy and passes with our hands, open bridges and overcome dangerous areas. So, we lure out special creatures, and then we run after them – they float through the air, illuminate everything around and force aggressive plants to remove their tentacles. Other plants (or what is it?) From the world of Lust’Ga swell and turn into convenient bridges if you kill one of the monsters next to them. 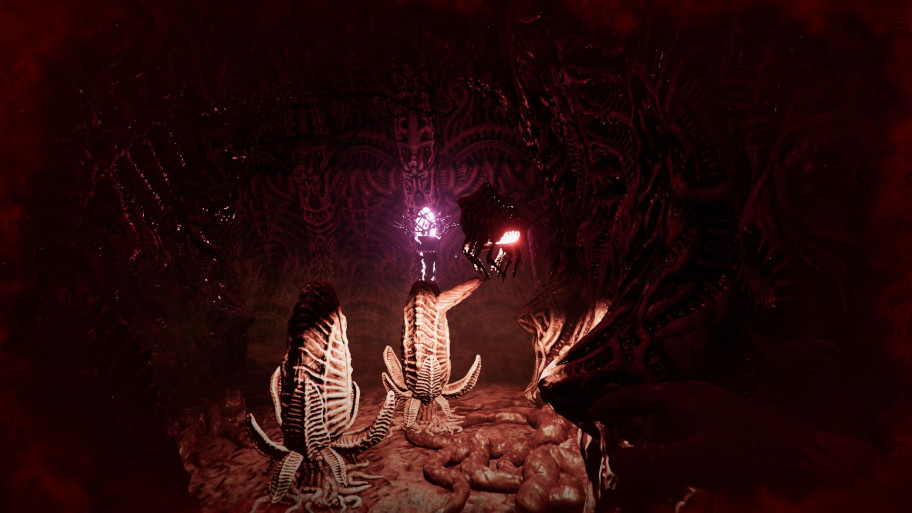 The flora and fauna in Lust’Ga are truly unique.

Finally, there are altars where you need to choose what to improve – health, speed of movement in stealth mode or mental stability of the character.

That is, formally here we have a shooter with shooting and magic, and a quest with puzzles, and an RPG with pumping and moral dilemmas. In many ways it is – in this sense Lust from Beyond took a big step forward from the first game.

Another question is that if we take all these elements separately, then they are implemented, let’s say, at not the highest level. There are few interesting puzzles, a lot of repetitions, magic exercises are also of the same type, and the action is rudimentary. Only two boss fights will have to sweat. And there are two or three altars for leveling up for the whole game. 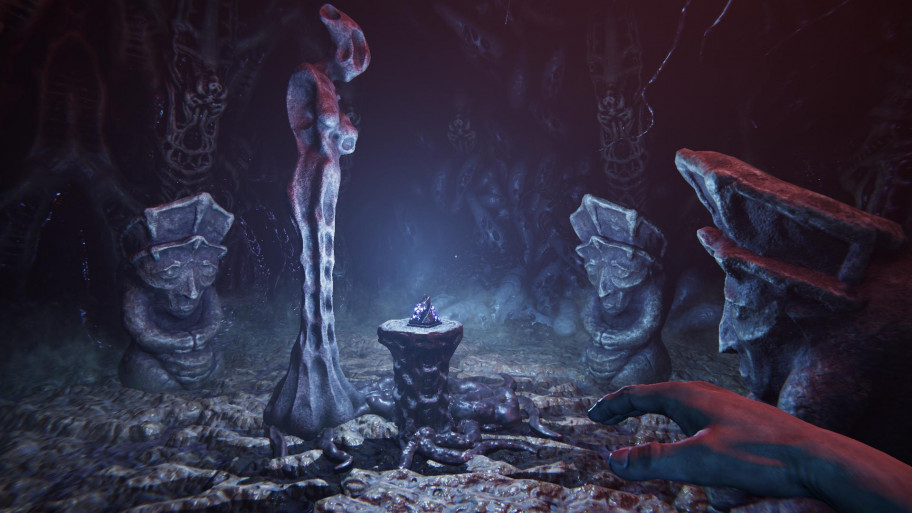 Here the design resembles the work of Zdzisław Beksiński.

However, when all these elements, albeit not well implemented separately, are combined in one game, and even supported by an interesting plot and “lore”, the impressions change for the better.

On the other hand, in comparison with the first part, the authors have done a great job – both the scale of the story and the variety of mechanics have grown. Finally, there is a third side – a personal impression, and not a dry listing of pros and cons. So, I didn’t really feel the proverbial pleasure, but follow the history Lust from Beyond it was interesting. Of course, the game has something to blame, but there is also a rather fascinating plot, a verified style and atmosphere. If that’s enough for you (and even more so if you liked Lust for darkness), then it’s still worth getting to know the new product.

Pros: in general, an interesting plot, which, in comparison with the first part, has become more ambitious; the ability to influence the fate of some characters; more varied gameplay than the original, combining elements of different genres; if the character models and animation look average, then the design of the environment leaves positive emotions; good work of voice actors.

Minuses: little horror; many repeating puzzles and situations; although the level of performance has increased compared to the first part, the game still looks like a typical ambitious indie, the authors of which want a lot of everything at once, but do not have enough resources.

Creating Your Own Adventure in Wonderbox: The Adventure Maker, Waiting for the Apple Arcade Release