Xiaomi in its new version of the system MIUI 12.5 lets you uninstall multiple built-in apps… We have already seen the list of these built-in applications provided by the Chinese manufacturer and we are ready to share this information with you.

In addition to the new animation, Xiaomi’s new MIUI skin in version 12.5 brings another fundamental change for smartphones from the ecosystem of this Chinese manufacturer. This time, Xiaomi has reduced the number of basic embedded apps. On the contrary, the number of those which we can freely remove…

Unlike previous versions, the reduced number of main pre-installed applications will help not only improve performance, but also free up more space in internal memoryif you need it. 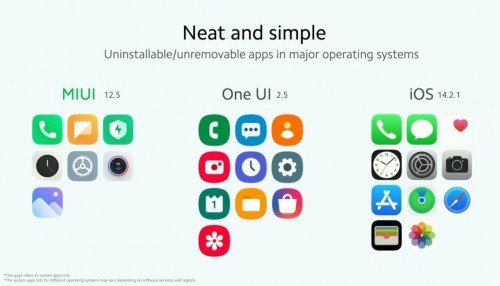 To be precise, MIUI 12.5 contains only 7 basic applications. In comparison, Samsung One UI has 10 built-in apps, and more (11) built-in apps are included in Apple’s iOS 14.

As we can see in the attached image, Xiaomi has done a great job because the smartphone only such applications are neededlike Phone, Messages, Security, Clock, Settings, Camera and Gallery.

In MIUI version 12.5, we can remove more

But that’s not all, except for the minimum of basic applications, MIUI 12.5 allows we remove more preinstalled appsthan ever before. You can now delete items such as Notes, Screen Recorder, Weather, Compass, or Calculator.

In addition, we can remove from the desktop or hide other applications by reducing the number of visible icons on the desktop or in a folder. These include icons such as Downloads, Themes, Music, Videos, and more.

MIUI in the new version 12.5 will receive not just cosmetic changes, but ones that will really help improve performance and optimize power consumption. Reducing the number of basic applications and, as a result, saving internal memory is also a pleasant trend.