Xiaomi Redmi Note 9S Is a near-perfect device that provides everything the most advanced user could want, and more at a ridiculously low price. The Redmi Note 10 Pro may have managed to squeeze this smartphone out a bit, but it still remains the champion it has always been.

With a Snapdragon 720G processor, 48MP camera, and HDR10-capable display, the Redmi Note 9S will still be a welcome acquisition, and its specs look pretty decent in 2021. However, the phone has one problem that spoils its image. Users report that when speaking the sound from the speaker of Redmi Note 9S is quiet so much so that the interlocutor is barely audible. 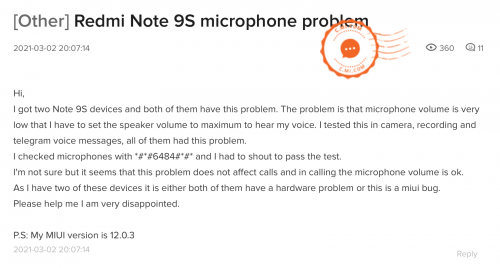 This issue occurs both ways, as several users also noted that Redmi Note 9S microphone is very insensitive, which is why they were barely audible “on the other side of the line” when making calls. But what is extremely discouraging is that the problem has been around for a long time, and for almost a whole year, hundreds of complaints and appeals have been received with requests to correct the situation. 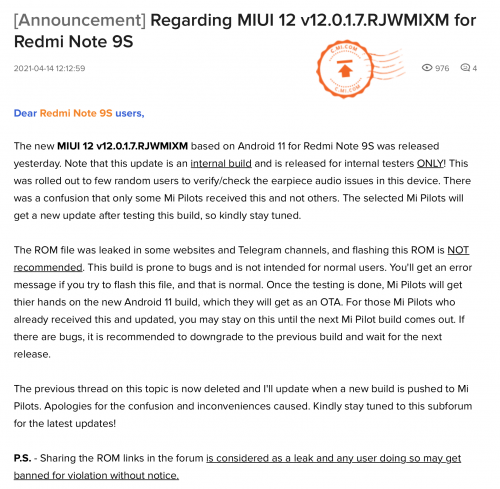 Complaints posted on the forums do not go unanswered by the moderators. But the latter can only report that the issue has already been referred to representatives of Xiaomi and, therefore, an update with bug fixes will be released soon. However, the promised update never materialized out of oblivion, and now all the hopes of users assigned to the upcoming MIUI 12.5 updatewhich is supposed to bring many fixes to optimize the performance of specific devices. 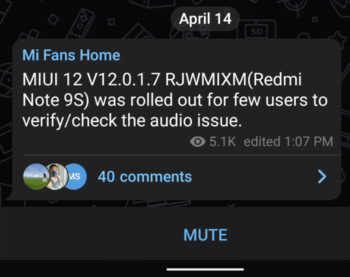 It would be foolish to deny the fact that Xiaomi really screwed up in this case. Being one of the most popular smartphone brands on the planet means having huge resources at your disposal. Nevertheless, this time the time spent by the manufacturer on fixing such an error is unforgivably long.

We can only believe that there is finally a light at the end of the tunnel, as the latest update MIUI 12.0.1.7 based on Android 11which is currently being tested should bring a fix for the audio problem during calls on the Redmi Note 9S. Interestingly, this build was erroneously released for Mi Pilot Testers due to “server problems”, when in fact it was an internal test build.

If you are one of the testing users and have managed to update your device with this new build, do not worry – with this version you will still receive OTA updates.

But if you are not participating in the Pilot Testing program, then it is not recommended to update the assembly, as it contains errors and it is not intended for regular users. You may encounter these errors when trying to install an assembly.

Somehow it’s good to see that the problem of low talk volume on Redmi Note 9S will finally be solved (at least they are working on it).

Racing arcade Geta Race appeared on Google Play, but not in all countries