Relevant for the platform: PS5

A platformer divided into levels with obstacles, traps, and collectibles. There is an instant restart after death – when you see such a description, it immediately comes to mind Super meat boy… Developers Sir lovelot probably inspired by this famous game and tried to create something similar but made a couple of fatal mistakes.

We take on a knight’s role, who must find a flower at the level and bring it to the tower, where the princess is waiting for her beloved. This must be done at each of the 40+ levels scattered across four themed locations.

The knight can double jump, bounce off walls, and shoot. From what he shoots and why, we will never know, but this is not particularly important. The important thing is that this shooting seems superfluous, and the monsters as if placed at random. Some of them are motionless, some practices do not react to the knight, and only at the end of the game, some opponents can fight back. But there are no problems with them either.

In the event of your death, the funny thing is that enemies killed at the level do not respawn. That is, even the developers themselves understand their uselessness without really punishing the player for death. The most annoying thing about monsters’ placement is that they can be located on narrow platforms, forcing you to jump to the very edge and quickly shoot them.

The game has problems with complexity. There are thorns everywhere, crumbling platforms, shooting statues, which especially interfere with swimming underwater. But if this is not the first platformer in your life, the local levels you will click like nuts – maybe you will die a couple of times, but there are still no penalties for this. 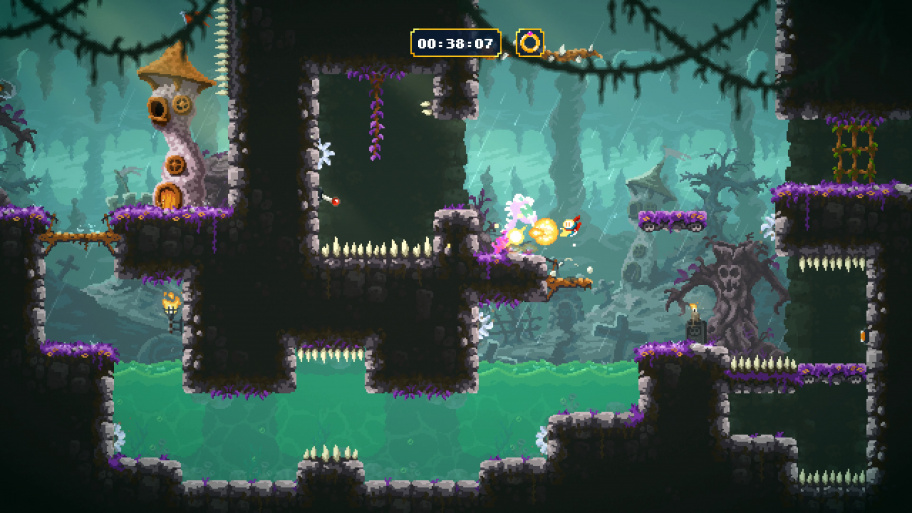 It is always effortless to get to the levers that open access to the next “rooms.”

Because of this, the game fizzles out quite quickly – it does not change so much throughout the passage, and already in the middle, it becomes boring due to the monotony and lack of at least some kind of “challenge.” Jumping over the spikes is very easy. Dodging enemy attacks is easy (since the controls are very convenient). There are episodes in which a huge boulder rolls after the knight, and the player seems to have to run away from him, but every time I managed to outwit the game and jump over the stone, letting him go ahead.

There is no interest in finding collectibles that are hidden in each location. To find them, you need to explore every wall in the hope of finding a secret room, and if it’s fun at first, then the location of the secrets becomes more and more obvious. Again, the developers seemed to be afraid to scare away the audience, which is why they set revival points everywhere and even searched for secrets dreary and too simple.

At the same time, it looks Sir lovelot beautiful – in many ways, that’s why she initially interested me. Bright, cute locations cheer you up, and the funny soundtrack leaves only positive emotions. However, the end’s appearance begins to tire – the color palette changes, but many elements remain unchanged from the first levels. 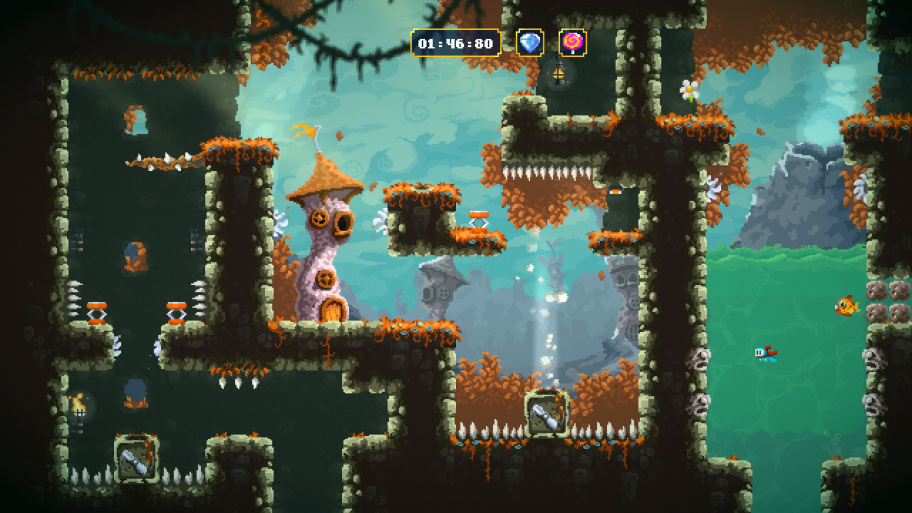 It is a little more difficult to control the hero underwater than on land.

Maybe I just don’t hit the target audience. Sir lovelot and the game are designed not for fans of hardcore platformers but young beginners. It will probably be good entertainment (although in this case there is not enough local cooperative). Where they do not punish for mistakes, do not demand to do everything quickly and filigree. This can be considered a kind of preparation for something more difficult, like Super meat boy and Celeste…

If you are looking for something similar to the above games, then Sir lovelot cannot offer anything of the kind. She is straightforward, and her attempts to make the player difficult are ridiculous. It is a pity that practically no one has succeeded in repeating the success of “Meat Boy” for more than ten years. Well, at least a platinum trophy in Sir love lot. You get it many times faster.

Minuses: lack of any complexity; inappropriate shooting; the monotony at the end of the game is very tiring.

Wulfgar’s character and his abilities in the latest video D&D: Dark Alliance

The adventures of Lieutenant Rzhevsky flew to smartphones, the classics are immortal