Nomadic has released the survival simulator Last Oasis on the Xbox family consoles. The game is available through Game Preview and is sold in the Microsoft Store for $ 29.99, but you can download a free trial before purchasing.

Recall that initially Last Oasis was released in March last year on PC on Steam and is still in Early Access. Since then, the project has received several major updates, and literally with the release of the Xbox One and Xbox Series X | S, the third season started, which brought many gameplay changes.

Last Oasis is a multiplayer Survival game about nomads who have to constantly move in order to survive. After the Earth stopped, most of humanity died, and gigantic territories turned into deserts and ice mines. Only a narrow strip of space between them is suitable for life, but it moves with the movement of the planet around the Sun. 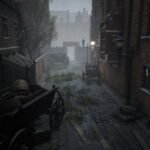