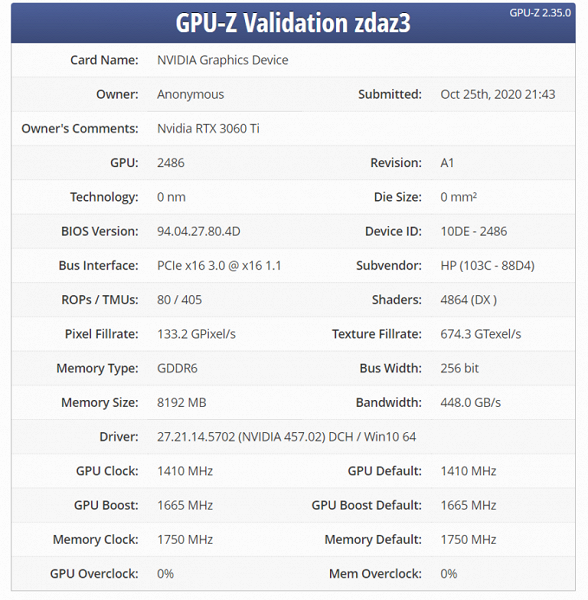 Nvidia has canceled the GeForce RTX 3080 20GB and RTX 3070 16GB graphics cards, but the debut of the RTX 3060 Ti doesn’t seem to be in danger. This model is due out in mid-November for under $ 400. Now confirmation of the characteristics of a promising novelty has appeared on the Web. Configuration data obtained using GPU-Z utility.

The GeForce RTX 3060 Ti will be Nvidia’s second model based on the Ampere Generation GA104 GPU, with 80 blending units and 4,864 CUDA cores. But the number of texture units (TMU) determined by the utility is clearly incorrect. However, the most important thing in this leak is the frequency data. As you can see, the base frequency of the GPU is 1410 MHz, and the frequency in Boost mode is 1665 MHz.

According to the characteristics of the memory, the GeForce RTX 3060 Ti corresponds to the RTX 3070: it received 8 GB of GDDR6 memory with a frequency of 14 GHz, connected to a GPU bus with a 256-bit memory.

Nvidia has not yet commented or confirmed the existence of the GeForce RTX 3060 Ti, however, according to the source, the company’s partners are preparing to release this model with might and main. But after a couple of days on the market to be released GeForce RTX 3070. Perhaps, this model does not even become so scarce, as the GeForce RTX 3080.