The Wild at Heart: Review

The wild at heart – game in the style of series Pikmin and Overlord, where you can indirectly control a group of small funny creatures that run after you, fight for you, collect resources, help solve riddles and gain access to new areas. We tell you how interesting it is to do this here and what else the game is remarkable.

What The wild at heart especially remarkable, immediately striking. This is, of course, about a warm, tube art style. In him, you must agree, there is something childish, almost cartoonish. And this is no coincidence – we play as two children, the boy Wake and the girl Kirby. They decided to escape from the coastal town where they lived and settle in a wooden house built by themselves in nature.

This plan was invented by Wijk, who has always demonstrated remarkable engineering talents. He even put together a Gustbuster device – a kind of automatic vacuum cleaner that sucks up resources and destroys some objects with terrible force. Armed with it and a backpack, Wake, according to the plan, went to the forest to meet with Kirby, but lost his map and got lost. And then he met a strange little creature and followed him – and, just like in “Alice in Wonderland”, he found himself in a magical world, which in this case is called The Deep Woods.

Soon Wijk found out that from ancient times this forest was protected by the local Order of the Guardians, which is now going through hard times. 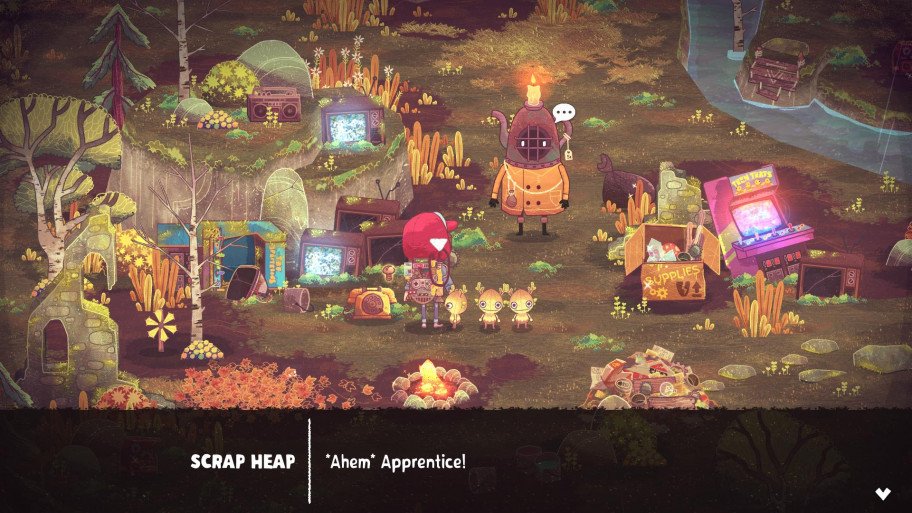 Among the Guardians, there are extremely funny characters.

Many Guardians scattered in all directions and disappeared. And it was Veiku and Kirby (she soon found a friend and joined the adventure) who had to bring them together so that the order would regain its former strength and be able to resist the curse that struck the forest. The fact is that at night there appear terrible monsters – Never (The Never), which steal memories and feed on emotions. Because of this, the locals even began to forget their names. And in general, all this threatens with big problems not only for the forest, but also for the world where Wijk and Kirby live. 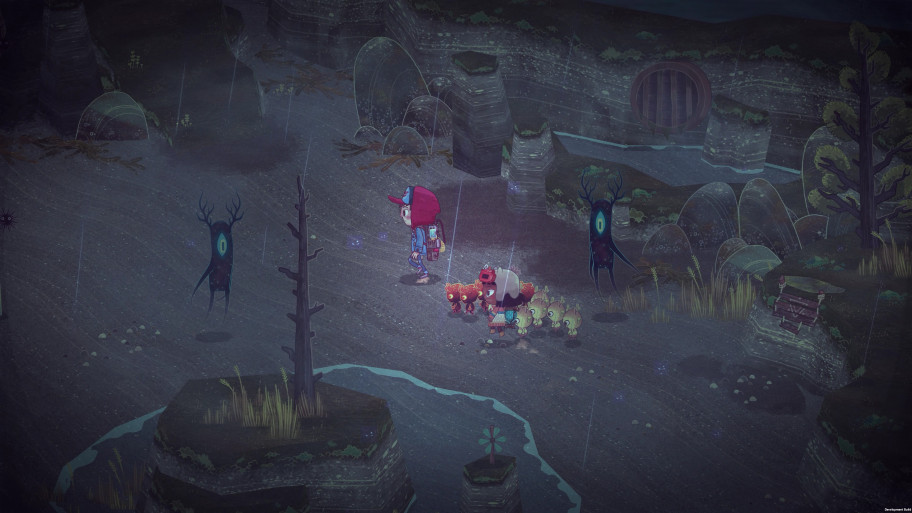 In the process of rescuing, they will have to explore and discover new locations, collect resources, craft items, communicate with bizarre creatures and carry out plot or side missions. At the same time, you need to do this all during the day, and with the onset of darkness you have to rush to the camp, where you can sleep until morning and avoid meeting with Never. 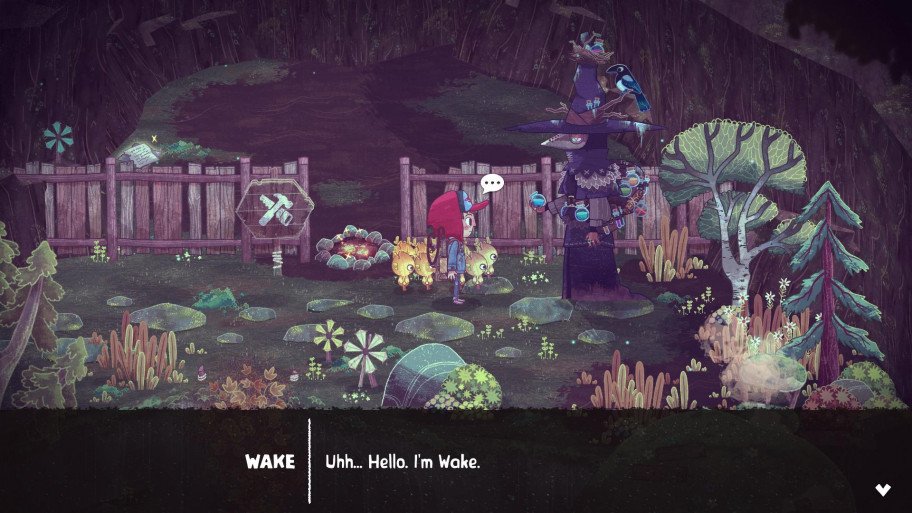 The main camp has characters with their services and side errands.

In parallel, the personal stories of our heroes are developing. They turned out to be very emotional and not childish at all. Despite all the fabulousness of the world, the game speaks to us about serious things. The children did not just run away from home. Wake’s dad drinks and rarely pays attention to his son, and Kirby is generally an orphan and does not remember his parents. And here the guy, resting in the camp, every now and then sees the same dream where his father is sitting in front of the TV – gradually new details appear, drama is pumped up, and all this in the end can even break through to a tear. 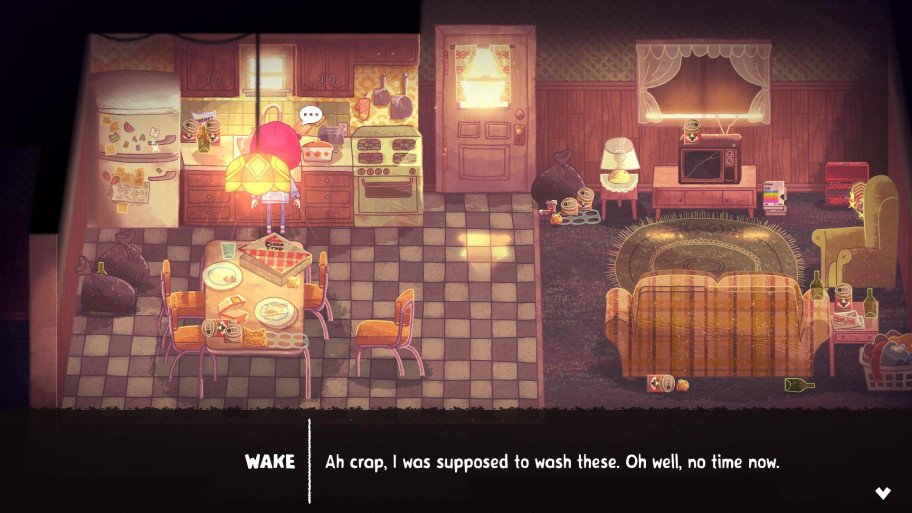 Weik keeps nothing at home.

As I said, the core of the gameplay The wild at heart – research, collection of resources and craft. Moreover, you can craft both according to the recipes found, and according to your own, improvised – creative freedom in mixing ingredients is only encouraged here. So you can either learn how to make one large piece of garbage from three pieces of garbage (and what, it saves space in your inventory and then you can sell it for more!), Or invent a useful potion. 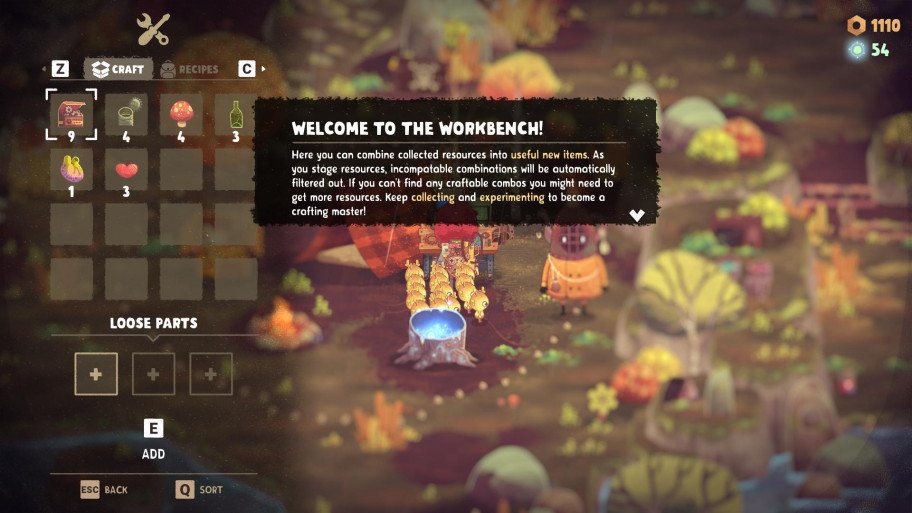 Crafting is allowed only on the machines in the camp.

But the main charm in The wild at heart – this is still interaction with spritlings, those very funny creatures that I talked about in the introduction. At the very beginning, we are given literally a few, but as we progress, the number increases. And this is important – we throw them in the direction of the enemies, and the more, the faster the spritelings will overcome them.

The role of opponents is mainly local living creatures.

It is spritelings, if directed towards a large stone and if there is the required number of creatures (somewhere it takes 8, somewhere 20, and somewhere all 75), that are able to push it aside and open a passage to a new area. Also, if you throw creatures in the right place, they will destroy some obstacles, destroy poisonous mushrooms, grab and bring us useful items for crafting and destroy different containers, flowers, berries and hives, from which resources are dumped.

The easiest way to pick up resources is with an automatic vacuum cleaner.

Then we will open (if we understand how) access to other types of creatures. Fiery spritlings will set fire to thorny bushes blocking our path, and will pass along the charred ground, and frosty ones – along the ice, where ordinary ones with frightened faces turn into ice. 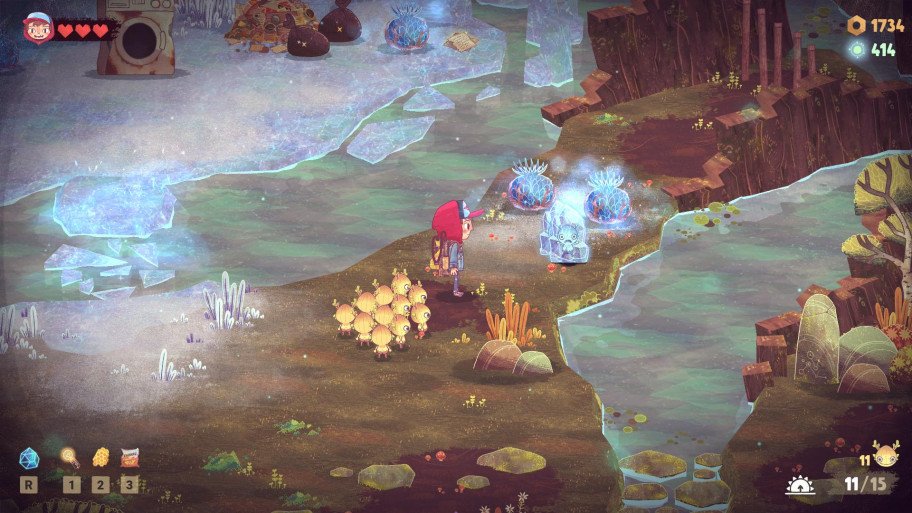 Upgrades are the head

In this situation, the main thing for us is to look for how to get to new areas, and collect special glowing dew, for which in the central camp (and there are others, smaller ones), you can increase the maximum number of spirits carried with you. In the same place, for dew from the found embryos, you can “grow” new creatures and pump the health of our assistants. This is important – after all, they can die from a meeting with some obstacle, an enemy, and even more so with Never, who generally kill with a couple of blows. Therefore, you have to constantly replenish the ranks and reserves of your army.

Also, at your base, you need to build buildings that open up access to other useful upgrades – so, among other things, we will be able to receive rewards for found relics, improve the health of heroes and their devices. The latter are also very useful. With the help of his automatic vacuum cleaner, Wake not only attracts resources and spritlings, but also spins the fans that open the doors and knocks down trees with a gust of wind so that they become a bridge. 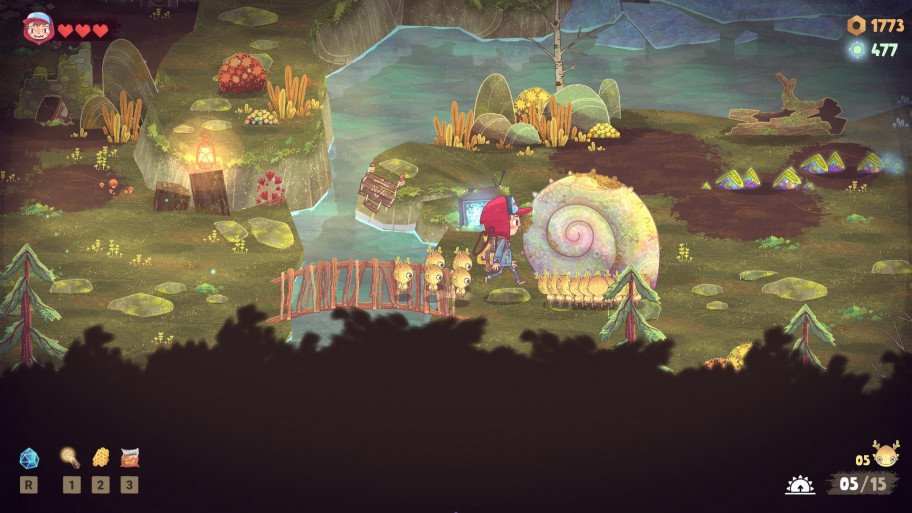 For some buildings, you first need to find and bring a special artifact.

And Kirby has a special device capable of destroying sources of pollution that prevent us from entering new territory. In addition, the girl knows how to crawl into narrow places where Wake cannot squeeze. All this, of course, is used to solve riddles – you often have to switch between characters. 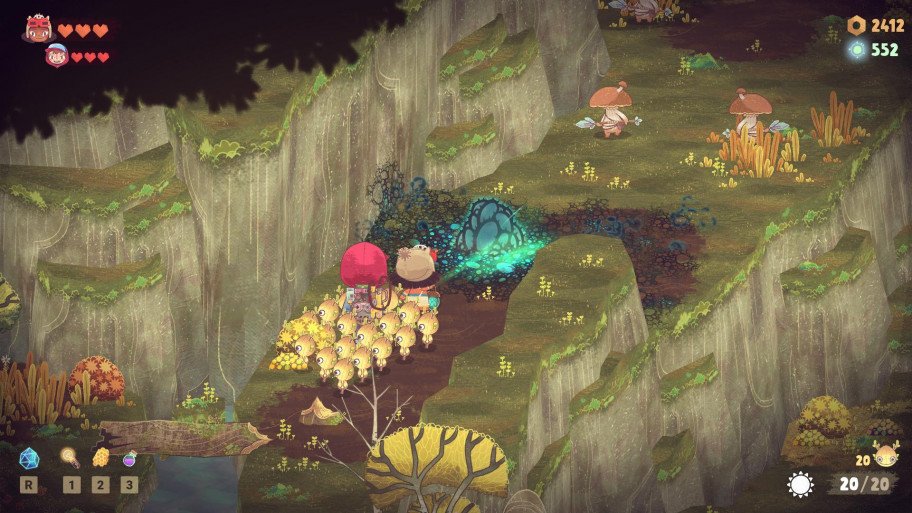 These switches are implemented conveniently.

Play The wild at heart – sheer aesthetic, mental, and gameplay pleasure. However, there are two problems. Firstly, we practically do not participate in battles – everything is too simple here. And secondly, many enemies and sources of resources are constantly reviving, and the game pushes us to grind – you just start to run past. But all these are trifles against the background of obvious advantages. A non-trivial fairy tale, supplemented by serious themes, a tube style and a varied gameplay, where there are battles, and puzzles, and craft, and the collection of resources, and an army of extremely funny magical creatures, does not leave you indifferent.

Minuses: the battles are simple – we hardly participate in them; in some places the grind becomes too much. 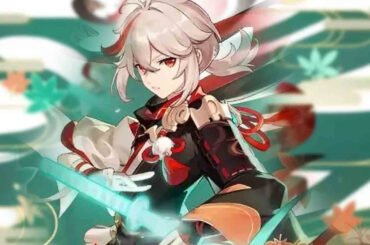