Xiaomi announced today an interim version of MIUI 12.5… As with earlier versions (e.g., MIUI 11.5, 10.5), the build contains aesthetic changes in addition to several privacy changes and a new MIUI + for connecting to computers.

According to Xiaomi, MIUI 12.5 is lighter, faster, and more efficient than 12.0. Actually, the shell uses 20% fewer cores and 35% fewer background memory than before. Energy consumption has also decreased by 25%. Besides, in the new version, Xiaomi has reduced the total number of system apps uninstalled (to 9), compared to others such as iOS, EMUI, and ColorOS.

Xiaomi says that despite MIUI 12.5 being this is an interim update, it presents itself as a complete version of the user interface. The new skin variant improves the MIUI Light Cone Motion Effect Architecture compared to MIUI 12. It offers dedicated flow for gestures, priority scheduling with an improved response time. 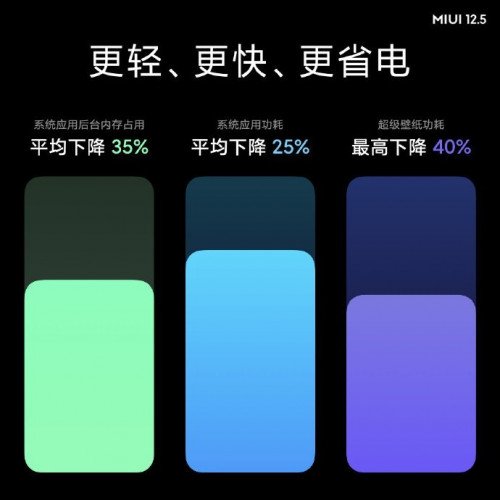 Computing power has also been increased 20x over the previous rendering engine. Also, UI animation has been improved. You can verify this by watching the teaser below:

In MIUI 12, Xiaomi introduced Super Wallpapers for Mars and Earth. With MIUI 12.5, super wallpapers get new locations… The first is Snow Mountain, taken from Mount Sigunyan. It is the tallest mountain in the Qionglai mountain range in Western China. In real-time, Xiaomi has fixed a 24-hour day/night cycle to match the time of day. 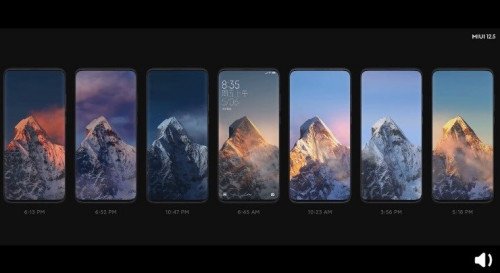 Other additions to the wallpaper include Shipwreck Cove in Greece (Navagio Beach) and Mount Blades Edge in Italy. Xiaomi also reports that more wallpapers will appear in the UI in the first half of 2021.

MIUI 12.5 also offers updated notification sounds from natural animals from four main habitats: the rainforests of South America, Australia, the pastures of East Africa, and the Arctic Circle. It says that with the help of the British Library, zoologists, and sound engineers from around the world, he recorded the sounds of about 120 creatures. 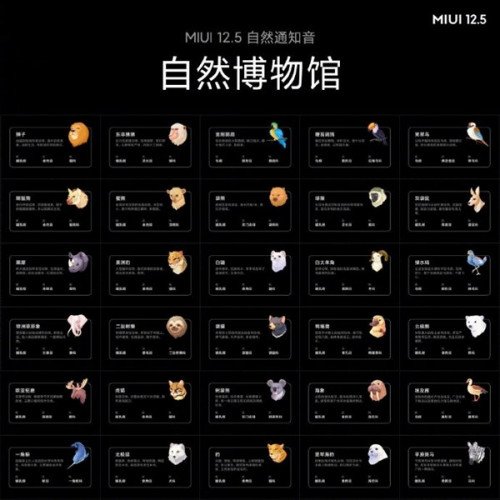 In terms of system sounds, the press release states that nature tracks like Wood, Sand, Water are bundled together with notifications, UI actions, and setting a duration for the clock countdown. All of these sounds are designed for stereo effects and are intended for dual speakers. 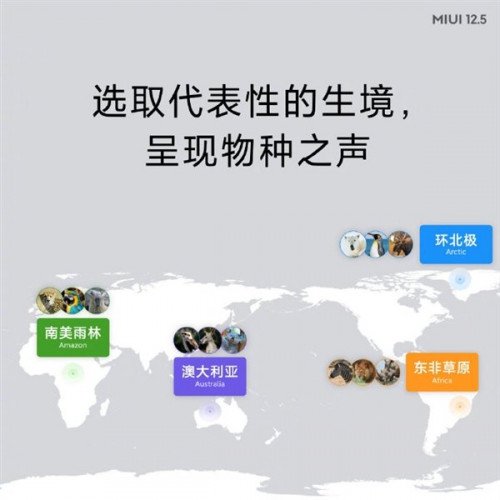 Besides the sounds, tactile sensitivity has been improved… For example, Xiaomi says it has improved vibration feedback for options such as locking, pressing, gestures, etc. These innovations apply to the entire library of every action you can use in the user interface. 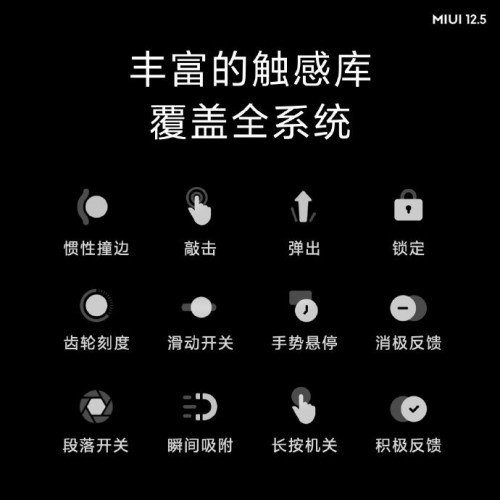 Xiaomi improved the MIUI 12.5 privacy scope in four different areas – in protecting the clipboard, file storage (sandbox mechanism), browser, and location (fuzzy positioning). Among other things, Clipboard Protection keeps a log of applications and allows users to know about those who go beyond to read the copied content. 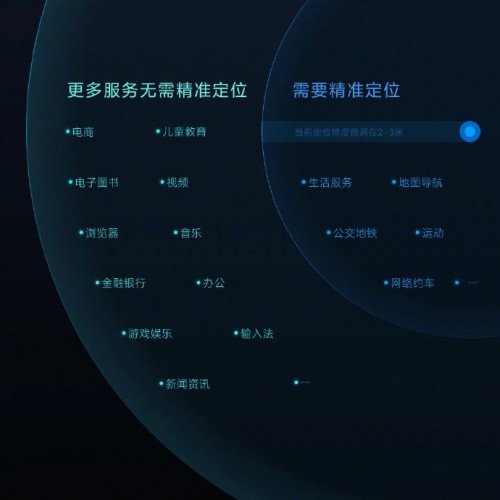 Fuzzy location Is a new feature that allows the user to hide his true location by showing his geolocation a few meters from the real one. The feature is designed to improve security in certain scenarios. Otherwise, precise positioning (from 2 to 3 m) is always available since the spoof’s connection is optional. 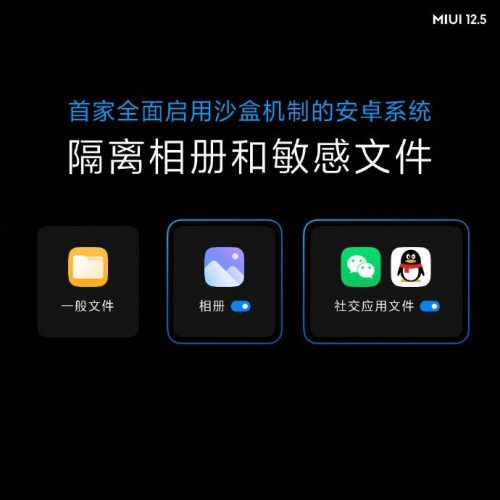 Next comes the sandboxing mechanism in the file storage application. If you are unfamiliar with Sandbox, it is a security mechanism that creates a separate, restricted environment to prevent sensitive information leakage. Accordingly, MIUI will help users to separate photos and data, storing them independently of each other, instead of giving apps access to everything at once. 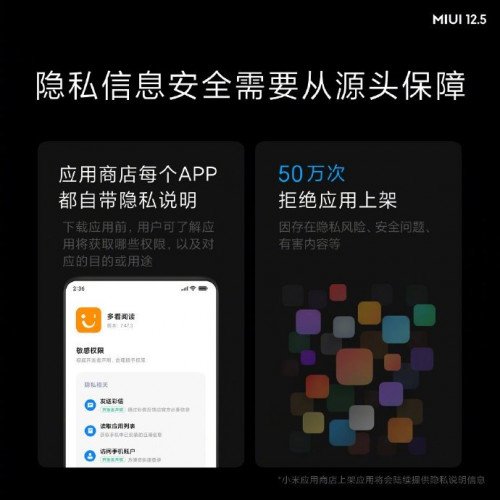 Xiaomi estimates that 53% of the 1000 most viewed web pages in China access personal information. To prevent this, using a built-in security app preventing interception of pages in the browser (Mi Browser), which also blocks the loading of malicious pages.

To top it off, the Xiaomi app store, starting with MIUI 12.5, will have specific privacy guidelines that include risks, security interventions, and preventing the spread of malicious content.

Xiaomi has also updated the Notes app to MIUI Notes. Users can now add quick notes, create diagrams, and timelines of notes with one click. The update also adds a graffiti feature optimized for drawing with your fingers (4 different brush strokes). 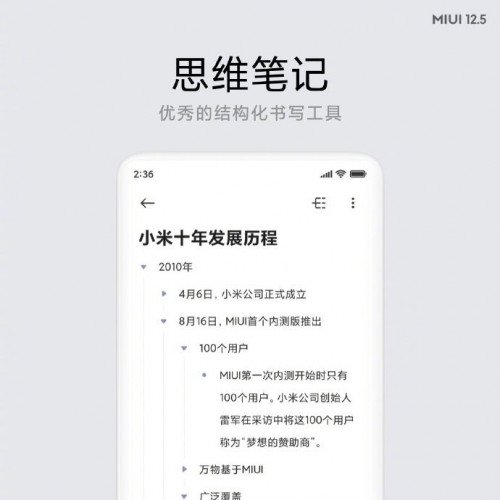 You quickly get a reduced window for quick recording of notes (text, image, links, etc.). They all sync instantly with the Notes app when you add them. The new Notes app also gets a new typesetting system with dynamic grids to improve aesthetics.

Xiaomi presented its first-ever cross-border connectivity feature in MIUI 12.5 with MIUI + (beta)… With its help, users can perform the following actions on the computer:


In addition to this, Xiaomi states that Mi File Manager and MIUI Notes will have a full PC interface… They will support keyboard and mouse operations and allow users to edit documents on the go.

Xiaomi has already opened registration for the closed beta testing of MIUI 12.5 for 21 supported devices… Anyway, let’s take a look at the list below:


As for the release date, Xiaomi says it has released a closed beta to select users via OTA from 21:00 local time last night (December 28)… However, public distribution of the beta will begin in mid-January 2021.

Tesla Gives Away Autopilot for Free

The best smartwatches and fitness bracelets of 2020: the final ranking