Xiaomi confirms MIUI 12.5 rollout schedule for over a dozen devices

Xiaomi has outlined plans to update many of its devices to MIUI 12.5 by the end of next month… The rollout only extends to the company’s devices with Chinese ROM, so it might be May before the latest Xiaomi OS reaches devices worldwide. Other models, such as POCO F2 Pro and Redmi Note 8 Pro, will remain without MIUI 12 update until June 2021…

So, Xiaomi is planning to release MIUI 12.5 for its devices in China. This year, the company announced which will begin a global upgrade of devices sometime in the second quarter but will not provide a more specific time frame or commitments for the shell distribution schedule. It is worth emphasizing that in Xiaomi, devices sold in China are dealt with by one team of developers, and gadgets supplied outside of China are dealt with by another. Therefore, it should be no surprise that the MIUI 12.5 release schedule only applies to Chinese phones. 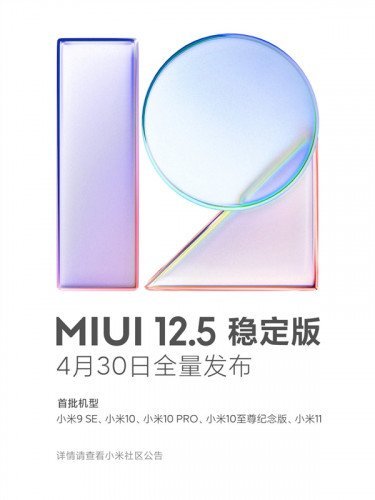 However, this information still indirectly indicates when Xiaomi will launch MIUI 12.5 worldwide. According to reports, MIUI 12.5 skin Should arrive on Mi 9 SE, Mi 10 and three other devices by April 30… Typically, MIUI’s China branch receives OS updates before others, with European, Indian and global branches following at least a few weeks apart. Hence, it is likely that the start date of the MIUI 12.5 global release schedule (Q2 2021) will be postponed to May 2021…