The game Infinite Galaxy flew into our review. It is a space mobile game that is similar to EVE Echoes and Infinite Lagrange. I drove the Galaxy for a week to give AppTime readers a balanced opinion. I will note that I played on the iPhone 8 and did not receive any “buns” for accelerated pumping. That is, everything was obtained by sweat and blood. But if this is not about you, then there is good news: a promotional code is indicated at the end of the review. If you activate it, you will receive a gift package. And we went!

Infinite Galaxy is a space strategy game. Our task is to build a spaceport, establish connections with other players, join the Alliance, destroy pirates, scout nearby systems, upgrade commanders, and so on. Sounds interesting to sandbox lovers, but that’s a lot of information at once. Therefore, let’s understand it gradually, and we’ll start with the local history.

According to the plot, we find ourselves in the year 4649; the borders of the Milky Way are broken, and private traders and pirates ply everywhere. Many raise banners against the cruel Empire, while others talk about the cool ships of the ancient race. The story is divided into chapters, those – on a mission. They are easy to do because the game constantly tells you what to do. We’ll talk more about this in the Gameplay section, but now let’s turn to the voice acting. She’s good here; localization may not be very good at points, but the voice actors did their best. And yes, everything is in Russian here.

Mostly local plot: a series of dialogues between characters. Personally, I am not particularly interested in this topic, so I calmly skipped them. Sometimes they may be asked to choose one of the answer options, which adds a little immersion. I tapped without looking, until no one tapped on the head. In general, the plot here is more for show, just like John Carmack’s. I did not come across any diaries with records of ancient races, because the whole emphasis is on the gameplay. Let’s talk about him. 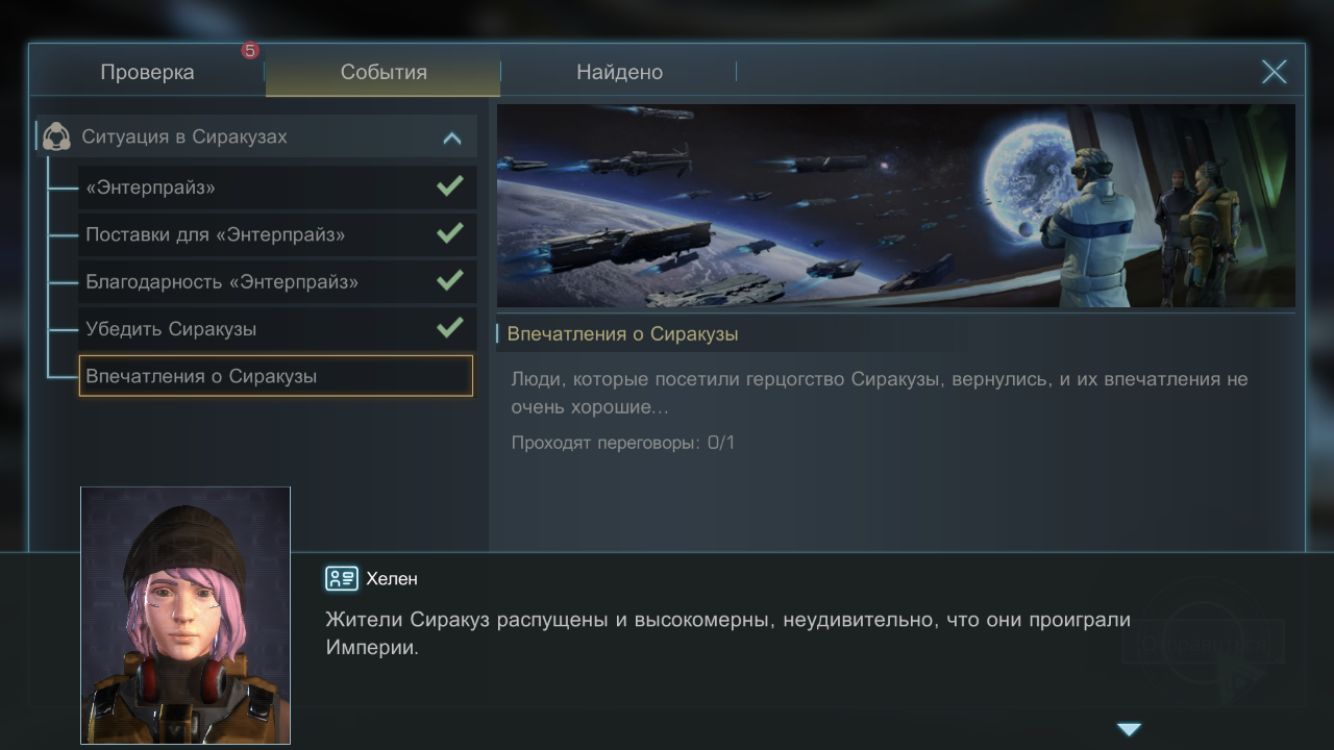 Local gameplay is a kaleidoscope of small elements. Here we will explore space, upgrade our base, recruit rare characters to the squadron and send a huge fleet to battle. If you want to stay for a long time, then join the Alliance and enjoy cool buffs. But first things first.

If you need to get somewhere: to an abandoned space station, a titanium asteroid or an enemy, then a system map or even a galaxy map will be used. The location of my port is conveniently indicated here so that I do not get lost. In general, it’s a little difficult for me to fly between systems or explore new regions: for me, these are just points with different names, where you send your fleet and wait until you complete the task. Everything looks beautiful, you can admire the stars up close, and not just in the night sky. 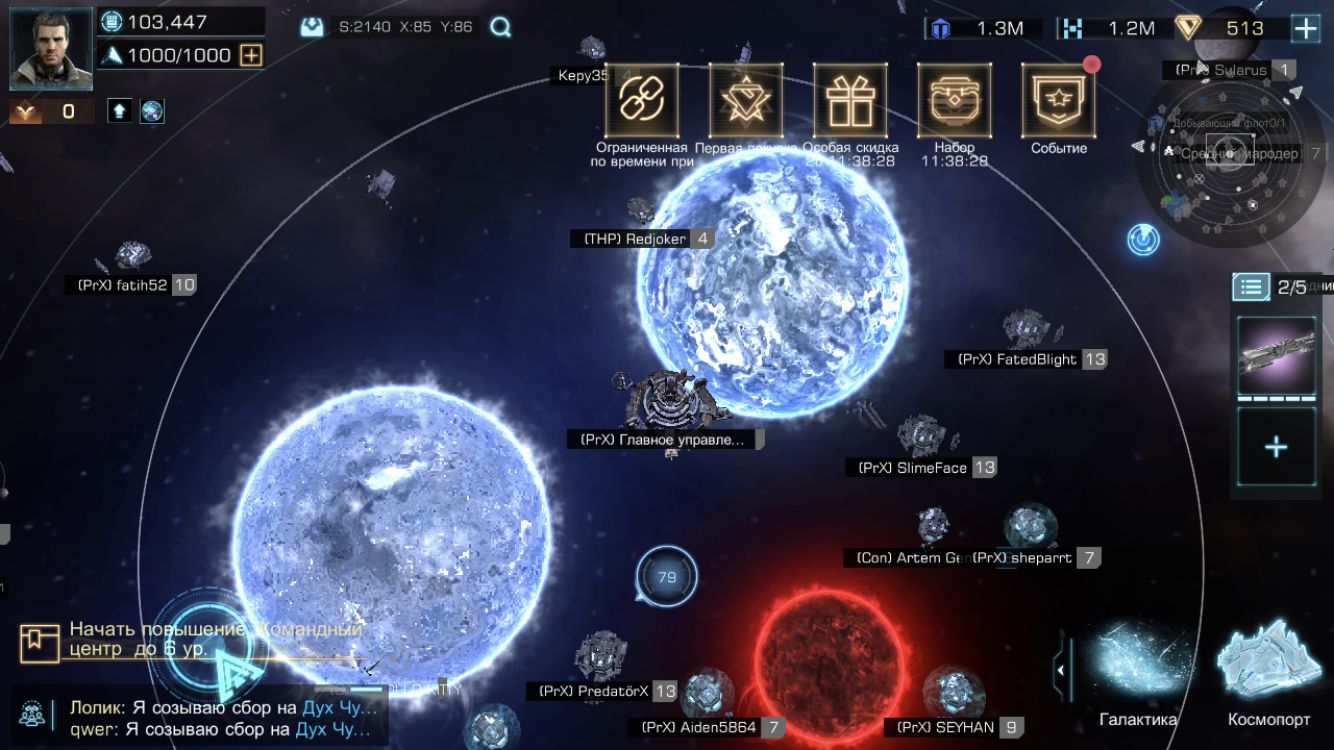 This is your base where everything happens: recruiting a crew, constructing and improving buildings, repairing and parking the fleet, plus researching technologies. This is a place for strategy and relaxation. From here you can safely pick up the reward from the tasks, pump yourself and your fleet from all sides, flip through the mail, pick up rewards from the warehouse, and also take part in battles. 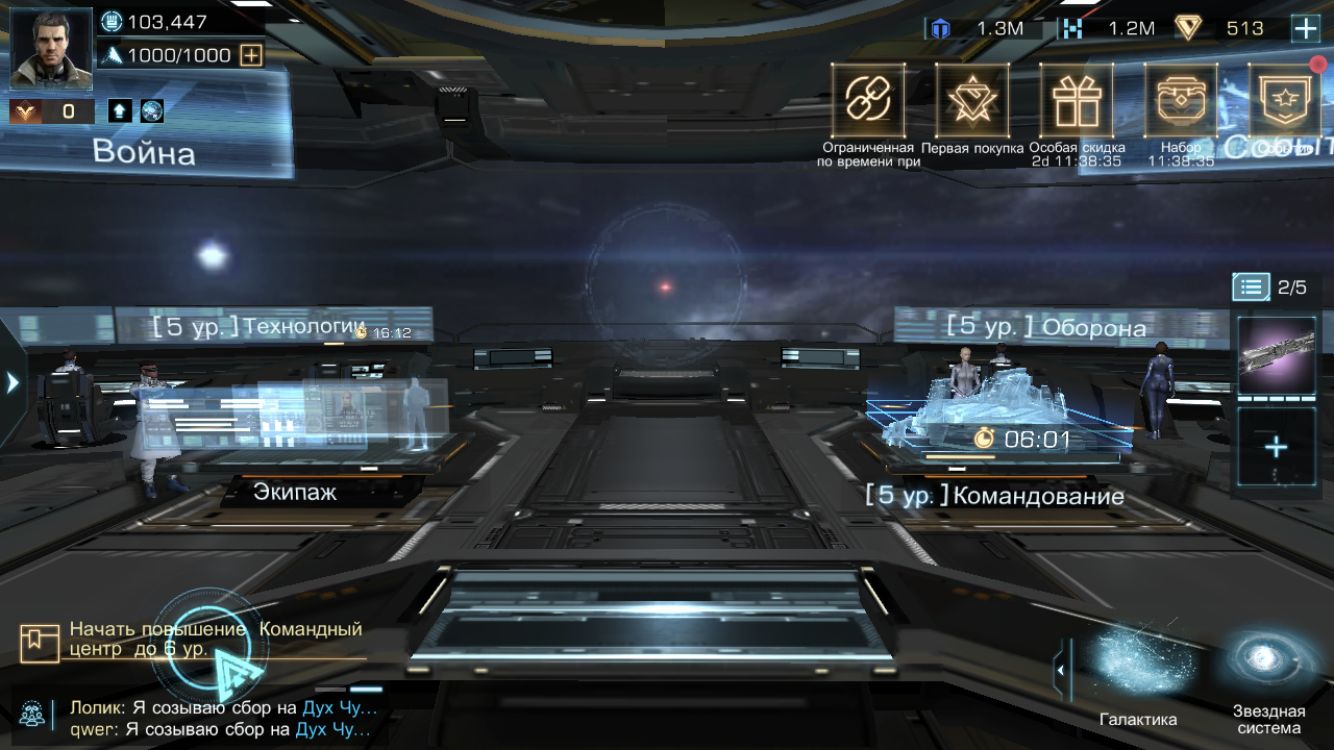 If we are talking about battles in a star system, then there we are simply watching two icons. Another thing is the “War” section in the spaceport. There we take control of the flagship and fly to deal with the enemy. For help, you can call small, medium or heavy ships for resources. The flagship has two abilities that allow you to quickly clear the field from the enemy. In fact, we are fighting off several waves of enemies. The battles are not protracted, about one minute; plus you can speed up the battle in half. For three stars (you must fulfill the conditions) give buns. But most of all the rewards you will receive from joining the Alliance. 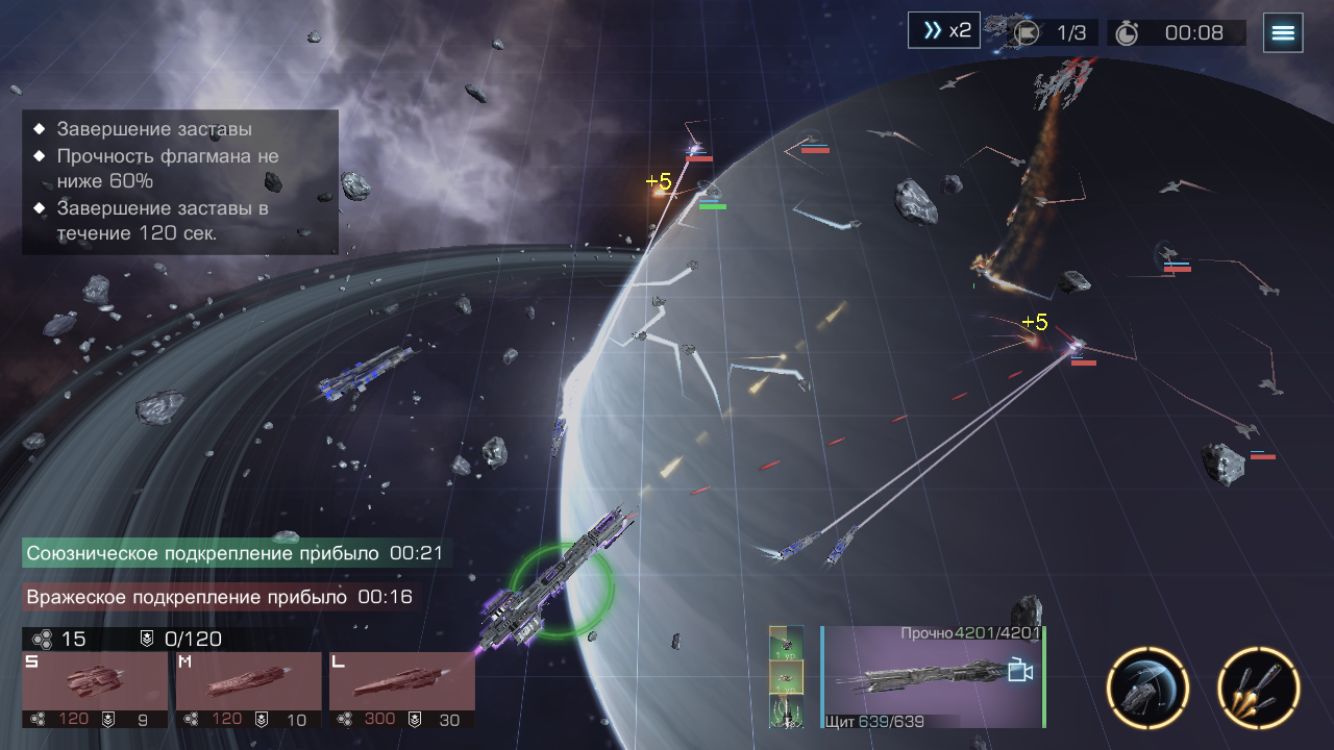 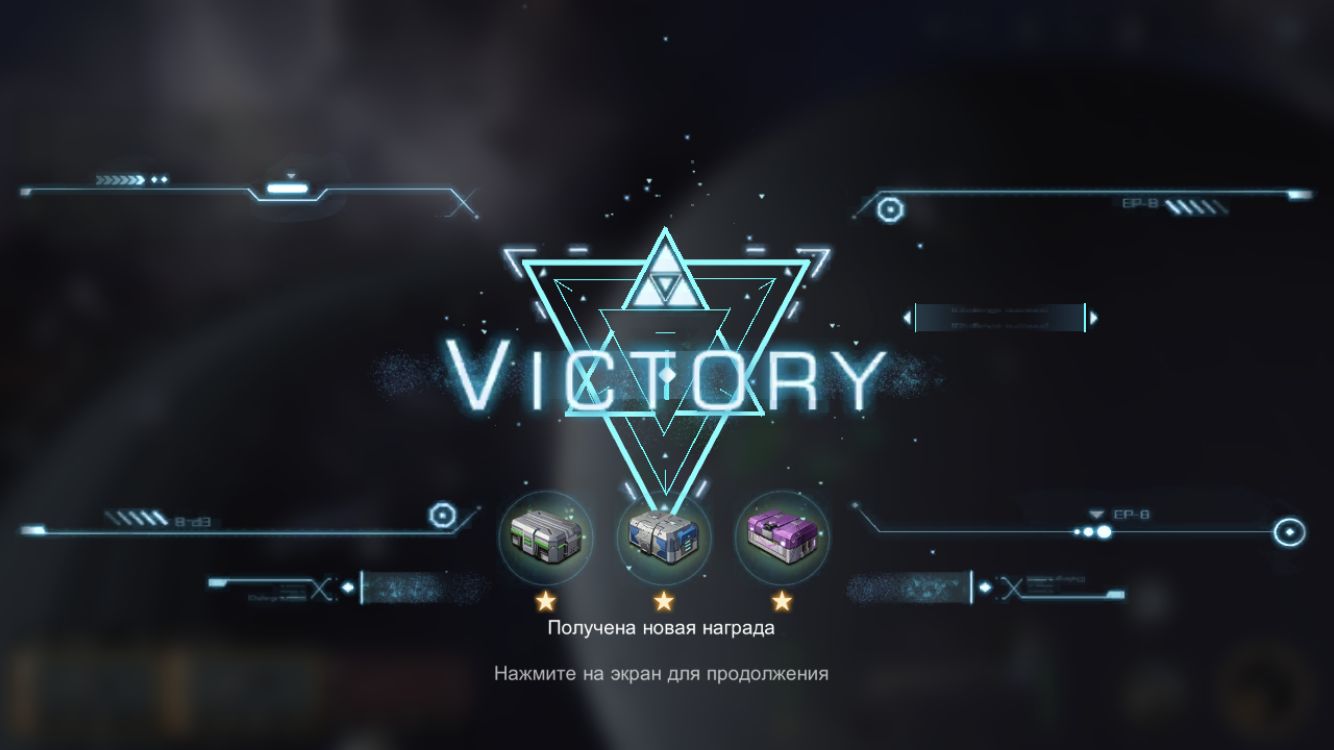 They correctly say that one in the field is not a warrior. It all starts pretty scary: we are at the edge of the galaxy, it’s empty. But later we are offered to join the Alliance. On this, everything changes for the better: we are transferring the spaceport to a kind of “hive” where many clan members have gathered. Sometimes you can see a ship flying out of a friendly spaceport, this adds immersion. Also, the guys help with the acceleration of construction simply by tapping on the button. It is clear that a normal Alliance is accepted on request and points must be poured into it so that they do not get kicked. But the game is worth the candle. 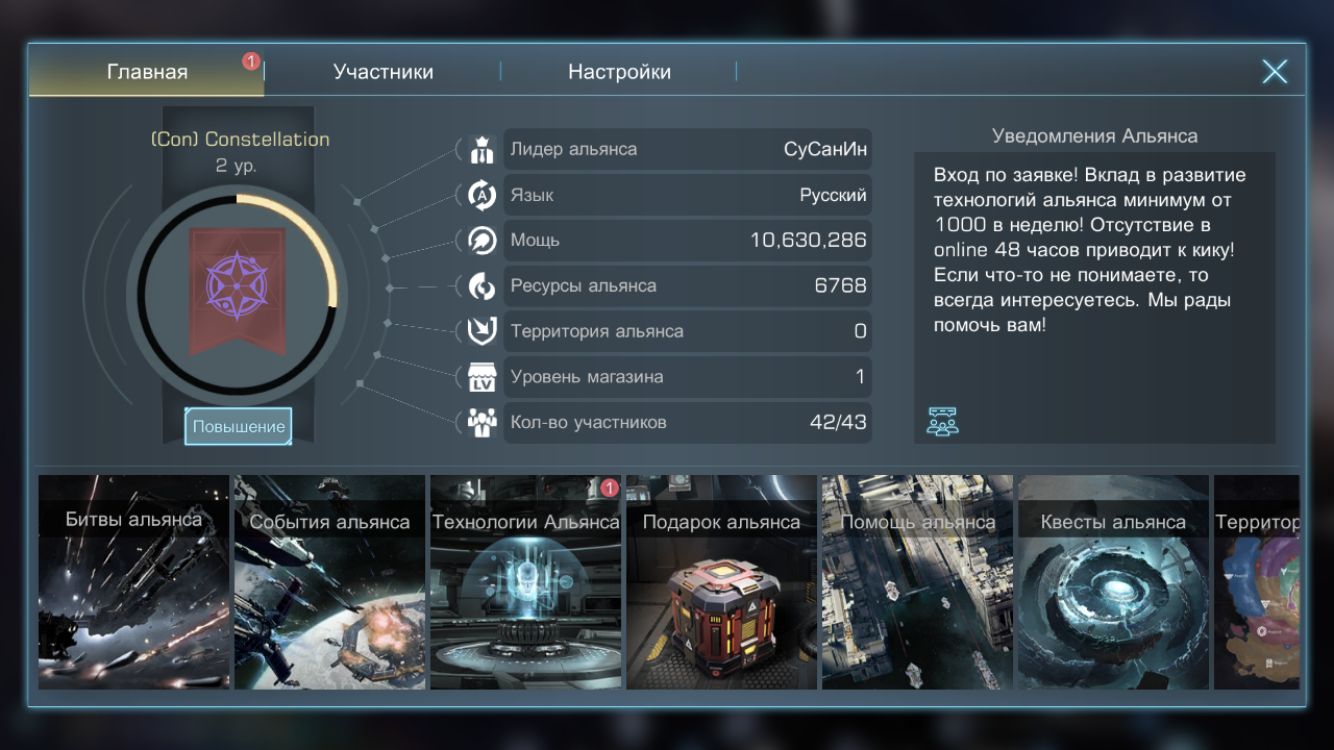 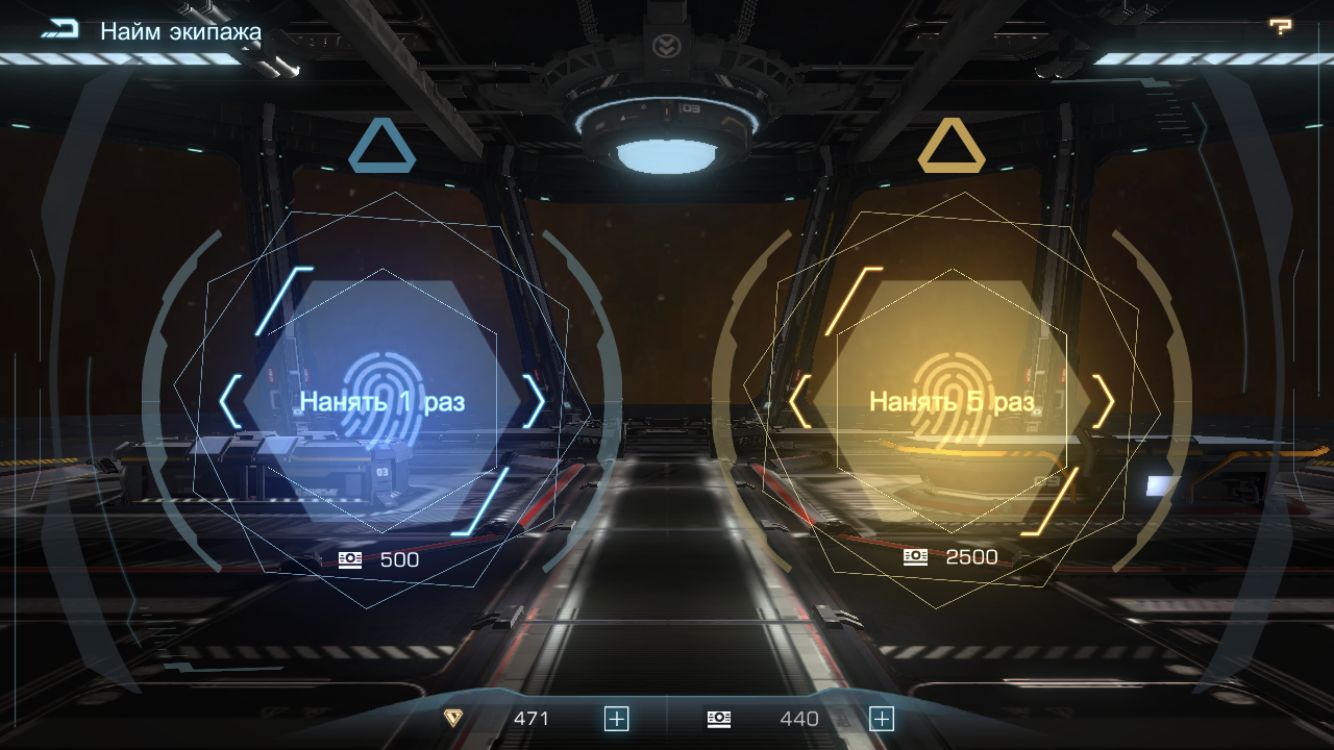 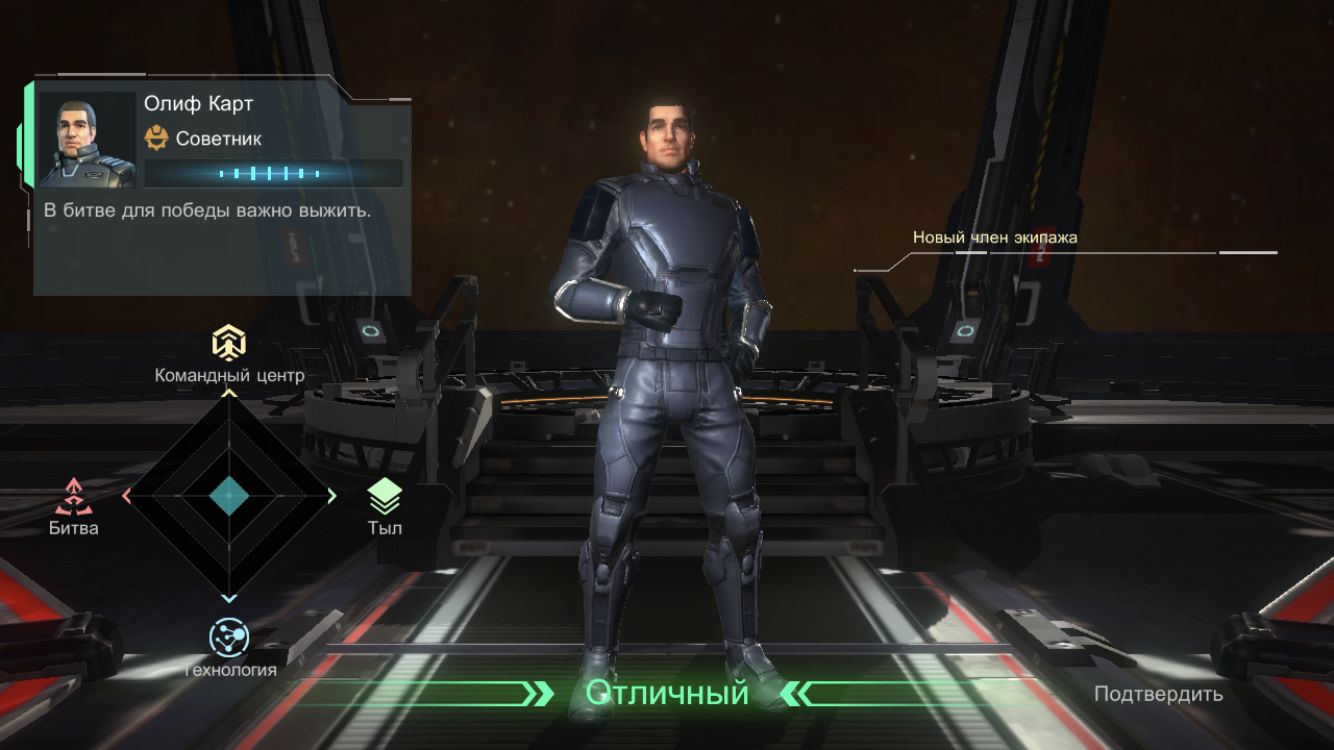 Infinite Galaxy has monetization and no ads. The developers offer “rookie kits” and other promotions. I found the smallest set for 179 rubles, it seems they give a cool flagship and resources. The game has a lot of resources, some of which are probably premium, but I have not yet had a situation where some resource was not enough. And this despite the fact that I calmly speed up production and generally spend resources left and right. Yes, maybe it will play a cruel joke with me “at a distance”, but at the start I do not feel the pressure of donation. You just go into the game, mind your own business, and exit. If all F2P games did this, then I would change my mind to mobile phones.

I got exactly what I expected – a space strategy with constant pumping, rewards for easy actions and a small social component. This is a shareware project, so there are small drawbacks, but this is not a game where you will be offered a battle pass, VIP status, evaluate the project, and so on. In fact, you plunge into an endless sandbox and create your story there. It is entirely up to you to become a tough leader, a resourceful merchant or a furious pirate. The main question is: “Is there time for this?” Either way, this is a good alternative to EVE Echoes and the like.

From May 31st to August 31st, you can enter a promo code apptimeto get different things. To activate it you need:

It should be noted that only one such promotional code can be used per account.

Looking at the gameplay of The Rising of the Shield Hero RISE, released in Asia

NBA NOW 21: Pre-registration for smartphones is open, another mobile arcade game from Com2uS?