Ulefone Armor 11T 5G – the first company phone with thermal imaging camerathat supports data exchange in next-generation 5G networks. But if 5G is an absolute novelty for the family of rugged smartphones, then Ulefone already had models with a thermal imaging camera. The design of the device is also quite recognizable – you will quickly realize that this is a rugged phone as soon as you look at it. Don’t get us wrong, the phone looks really nice, but at first glance it is clear that this is a rugged smartphone. The body of the device even somewhat resembles a tank – probably specifically so that there is no doubt that it will be able to endure the loads and tests that would be fatal for conventional models. In particular, its corners are reinforced to resist falls.

The bezels of the front panel are not too thick for a protected phone, and a dewdrop notch is visible at the top of the display – there is a front-facing camera. In total, the device has five cameras, four of which are located on the rear panel. In addition to the 5MP thermal imaging camera, the photo module also includes a 48-megapixel main cameray, 2 megapixel auxiliary camera and 2 megapixel macro camera. The selfie shooter located on the front of the device is characterized by a resolution of 16 megapixels. 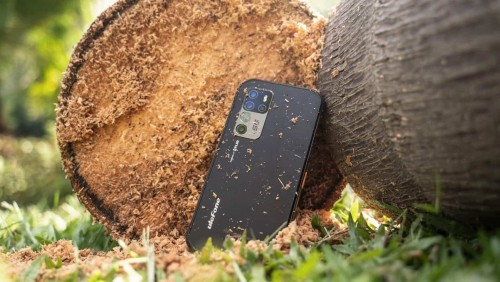 This phone is equipped with a 64-bit octa-core processor MediaTek Dimensity 800… It features a 6.1-inch HD + flat panel display, along with 8GB of RAM and 256GB of internal storage. Powered by the device from a powerful 5200 mAh battery with support for both wired and wireless charging. Includes 18W wired charger and 10W wireless charging. The Type-C port used for wired charging is located at the bottom of the phone. Ulefone Armor 11T 5G received a side fingerprint scanner, which is located on the right side of the case. This phone also supports face unlock which uses the front camera. The smartphone has two SIM (nano-SIM) slots and both of them can take advantage of the 5G connectivity. The device is running Android 11 (it is preinstalled on the phone), while both are supported NFC technologyand Bluetooth 5.0.

Ulefone promised a “big discount” for the “first batch of buyers.” Pre-sale will start on June 7 at Banggood, but the price of the Armor 11T 5G hasn’t been announced – we still don’t know how much the phone will cost.