Relevant for the platform: PS4

For the second supplement for Immortals, Fenyx Rising had high hopes. The first DLC was more like a set of puzzles that were not included in the main game – enough for puzzle lovers but wanted something fresher. The second additive, called Myths of the Eastern Realm, seemed like something completely new. Instead of ancient Greek, Chinese mythology is a previously unseen hero who cannot even change gender and appearance, a completely new location with its own storyline. What happened in the end?

I didn’t recognize you in makeup

But it turned out that the Chinese studio Ubisoft Chengdu could not offer anything better than giving the players the same game, only on a smaller scale and in a different setting. It is hilarious at first to stumble upon mechanics and objects that are absolutely identical to those in the original, only now they are called differently – in the Chinese manner.

Instead of healing pomegranates, there are peaches instead of blue mushrooms – lingzhi mushrooms. If earlier we collected ragweed, which usually lay on the tops of hills and mountains, now this is the land of the Sizhan – it also allows you to increase your health reserve. And Zeus’ lightning bolts were replaced by celestial agate, which can still be found at the end of each puzzle challenge. There were coins of Charon – became jade coins. There was the Phosphorus bird – now the Ching-wei bird. Everything is the same, with no new ideas.

Then you get even more disappointed. It turns out that the developers decided not to add new combat abilities but only slightly modified the two old ones. When you activate a technique that summons dozens of sharp spears from under the ground, the Huang Di Blades are additionally released – just a few knives fly towards the target. You can buy an increase in damage from them or the power of stunning the enemy for coins. And when you hit the ground with an ax, a series of devastating waves is added. In general, as you fought in the original, you fight here as well.

You don’t even remember about these daggers.

Opponents who were repainted in other colors look especially funny. Swordsmen, shield guards, gorgons, big guys with energy shields, birds – I did not see a single fresh opponent, except for the bosses. The enemies also have new names, but this is a very pathetic attempt to pass off the local monsters as new creatures. If you spent at least half an hour in the original, you have seen all these enemies more than once.

Because of all of the above, exploring a new location is not so interesting – it’s hard to get rid of the feeling that you are playing the same game, only reduced several times. You can still get binoculars and scan the area for chests and challenges, and you can still fly over the ground with your wings. Once again, there is no desire to fight – since the set of skills is old, and the enemies are the same, what’s the point of doing the same thing again, for which you spent three dozen hours in the main Immortals?

At least something new

Innovations are found in puzzles, but not all of them are successful. There were puzzles in which you had to move four plates to get a picture in the original. Here, this riddle was replaced by wall frescoes of nine tiles: you shoot at one – the neighboring ones turn over, and you need to make sure that all nine fold into a picture. There is also a puzzle with bells – the larger they are, the longer they ring after being hit or shot; the player is asked to make them make sounds simultaneously. Both are not very interesting.

Sometimes the character will comment on the resulting mural.

Mechanics inside puzzles look more impressive. There are wind regulators – a kind of fans that can activate each other in a chain and be deployed with shots. There are transforming cubes – if you damage them, they will increase or decrease in size. Not so much innovation, but there are good puzzles, especially among the optional ones.

But in the tests (which are now launched through special gates, and not after falling into the dungeons of Tartarus), the new mechanics are completely shameful. Clouds were added here that can support the weight of the protagonist but dissipate when colliding with obstacles. They move slowly, so in some situations, you have to wait a few seconds for their arrival, like in bad platformers. They also introduced air rings hanging above the ground – you can be attracted to them with the same technique you use to approach the enemy.

The mechanics are very primitive, and the challenges are the same. For example, in one of the episodes, you need to jump between three clouds, simultaneously clearing the way, shooting wooden boxes, and throwing off iron boxes by telekinesis. On the other, you can lead the cloud through a short series of obstacles, changing the wind direction. It’s a stretch to call it riddles, and there are enough moments like this to get bored with the inventive puzzles from the original game.

Riddles with blue balls have also changed slightly, but only outwardly.

And what was the potential!

Despite all this, the second DLC cannot be called completely bad. Since the solid gameplay of the original has not really changed here, you play not without pleasure. Climbing rocks, looking for resources and collectibles, chasing crows in mythical speed tests … But you constantly try to find something radically new here, something catchy that you have not seen in Immortals… Instead, you get almost everything the same, only under different names or with different colors.

The expansion takes place in one evening, so there is really no plot here. The new protagonist Ku is a boring young man who, like Phoenix, at some point woke up after passing out and saw around him the frozen petrified figures of people. In one of the two regions, he meets Nu-wai (the goddess who created humanity, according to Chinese mythology), and in the other, with Gong-Gong, a powerful warrior and the god of water. 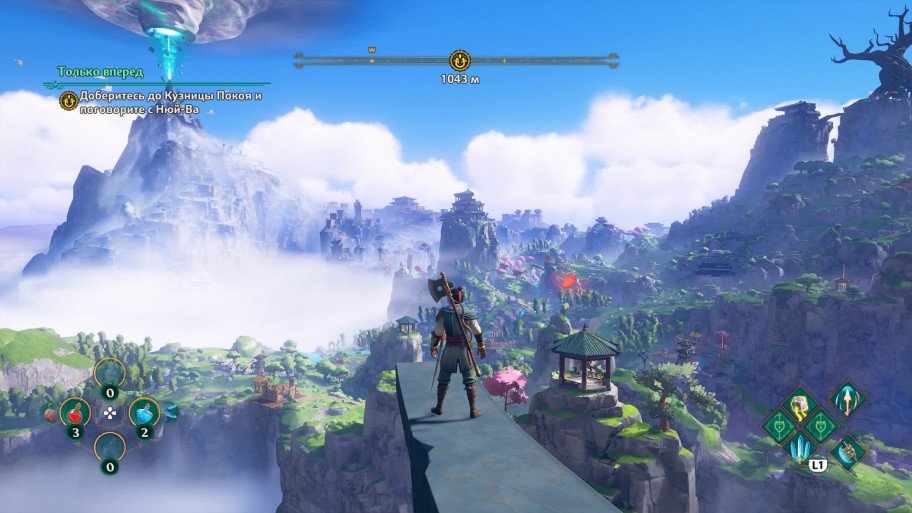 The artists of the locations did their best – the new region looks luxurious.

Both characters are flat and not memorable, and there are many times fewer jokes here than in the main game. Sometimes the heroes try to laugh (Nui-we can communicate with the protagonist through the bracer and at some point enjoys the “unlimited tariff”), but this makes the writers’ desire to be serious in other scenes seem especially strange.

You complete a couple of missions for one character, a couple more – for another (there is also a minimum of new ideas – you will have to throw fireballs in the furnace again, for example), and then you meet with the final boss. Here, the add-on drives the last nail into the lid of its coffin without offering any final “dungeon” – you appear in front of the boss and fight. But after that, it is reported that the equipment found in the DLC can be used in the main game. It is a pity, there is very little of it, and there are many repainted copies among the things. 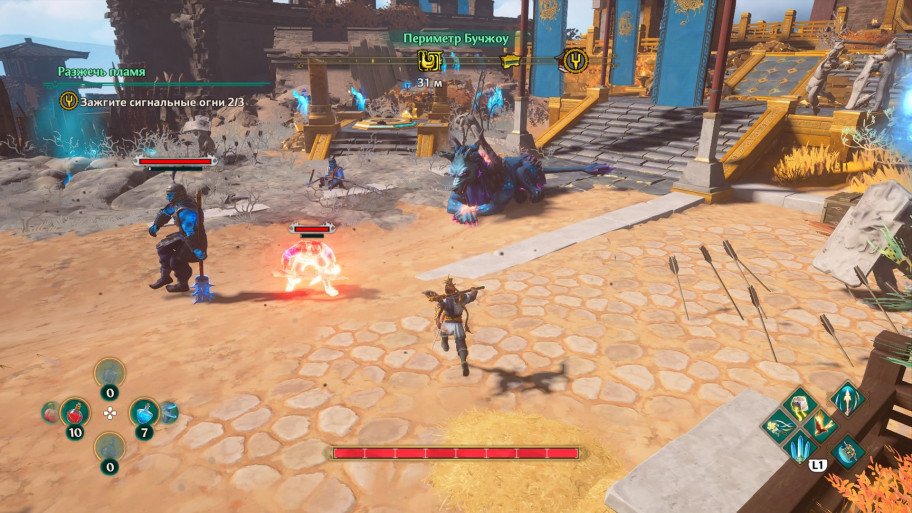 Ancient Greece and China are all the same.

In additionMyths of the Eastern Realm were greatly disappointed. I did not expect a full-fledged new game from the DLC, but with the change in the setting and the main character, I wanted to see more than just a miniature copy of Immortals Fenyx Risingwhere ancient Greek buildings were replaced by Chinese pagodas. There are catastrophically few new ideas here – instead, the developers took the old mechanics and changed them minimally. It would be funny if the third addition – with a top view – also turns out to be a copy of the original, only with a different camera angle.

Pros: beautiful new locations; there are some pretty good puzzles in the open world.

Minuses: almost complete absence of new ideas and excessive use of old ones; an ocean of missed opportunities associated with a new setting; not all new mechanics are successful and made puzzles interesting; weak storyline and boring characters who don’t have enough time to reveal themselves.