In March 2021, we had many new smartphones from Nubia, ASUS, OPPO, Black Shark. As a result, the February TOP-5 of the most effective flagship smartphones in the AnTuTu test has almost completely changed. Among new devices, models managed to gain leadership Black Shark 4 Pro…

According to AnTuTu, these are the best smartphones of March 2021

AnTuTu immediately declares that it cannot insist on this sample’s complete correctness because the monthly test of the most efficient smartphones and their ranking was carried out in the AnTuTu V8 version. The statement said that this could be the last list to be drawn from the V8 tests, as the V9 version is already poised to take centre stage.

The account of devices in the list and statistics period are recorded from March 1 to March 31, 2021. Also, the memory layout option of all flagship devices is fixed as 12GB + 256GB. As mentioned above, Black Shark 4 Pro tops the list with a whopping 765,579 points…

And finally, the last two positions are occupied by new members of the rating from the Meizu 18 series – Meizu 18 (710 459) and Meizu 18 Pro (698 611)… Summing up, it is worth noting that all smartphones from the flagship list are based on the Qualcomm Snapdragon 888 chipset, and the HUAWEI Mate40 Pro based on Kirin 9000 is excluded from the rating.

However, for mid-range devices, things are completely different. Much to our surprise, the list remained almost the same as in February 2021, only with a change in the placement in places and the overall average score. 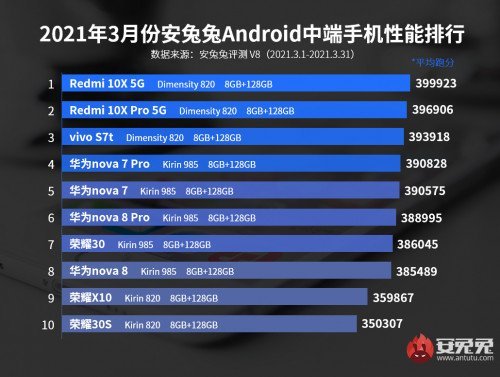 If you take a closer look, you will notice: in the last 7 places in the rating of middle-class devices, Kirin chipsets completely dominate, and only in the top 3 is MediaTek’s Dimensity… Unfortunately, the list of mid-range phones does not have one with the Snapdragon chipset, and this shows that for now, competitors have conquered this segment to end Qualcomm’s dream of absolute leadership.

PUBG Mobile received a lot of thematic content as part of the collaboration with “Godzilla v. Kong”