After all, remasters are a useful thing. For example, thanks to another, this time from Square enix, now it’s easy to play Japanese RPG on modern consoles and PC Saga frontier 1998 release, which at one time was quite popular and was part of a series that spun off from Final Fantasy… How interesting is it? Especially considering that the gameplay, which at one time caused an ambiguous reaction, remained unchanged. Or was it worth making not a remaster, but a remake?

This series was originally called The final fantasy legend, and its ideologist was the eminent Akitoshi Kawazu (Akitoshi Kawazu), veteran Square Co. (now Square enix), who stood at the origins of the original “Final Fantasy”, and subsequently produced Final Fantasy: Crystal Chronicles and The last remnant…

Saga frontier became the seventh installment in the series, and like almost all of the previous ones, it was commercially successful in Japan. These are the first games in the portfolio. Square enix, which began to sell over a million copies.

The series had many distinctive features. One of the first and most illustrative is the combination of a wide variety of worlds and styles, fantasy with science fiction and frank fairy tales spiced with humor. Therefore, among the playable races there were not only people, but also mutants with monsters who were pumped, devouring fallen enemies.

And after the release in 1992 Romancing SaGa perhaps the main feature of the series has been determined – a non-linear scenario and replayability, when we choose one of eight (usually) heroes and follow its history. In different games, these stories can intersect and continue to flow along their streams, or they can flow into one story-driven river. In any case, it is always tempting to see and try everything.

In Japan, judging by estimates and sales, this approach was appreciated – the same Saga frontier regularly made it to the tops and compilations of the best games of all time for the PlayStation. But in the West, where they are accustomed to a more comfortable and organized, perhaps, gameplay, the assessments were mixed. 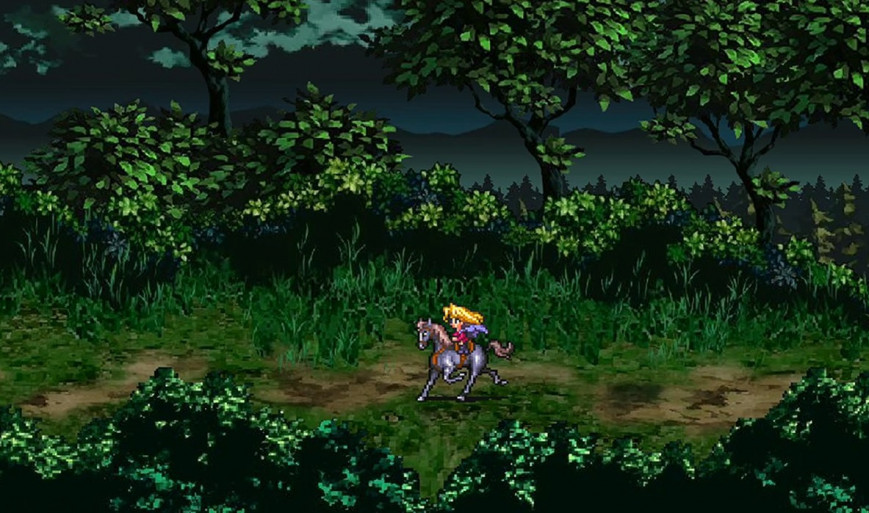 In 2019, the remaster of Romancing SaGa 3 was released.

Indeed, Saga frontier even against the background of other games in the series stands apart. Here we choose one of seven main characters and go to follow their personal stories, each of which is designed for 8-10 hours.

Among them is a former supermodel charged with the murder of her boyfriend, a police officer; a monkey girl from the race of monsters looking for artifacts to save her native people; a guy who suddenly became a superhero to fly around the world on a huge ship and fight against a transnational corporation of evil; and even the T260 robot, which went in search of batteries and its purpose (and at first… a talking octopus is trying to revive it). In general, the heroes and stories are, to put it mildly, colorful, there are various references – including to fairy tales about princesses who lie in a coffin and wait for a kiss. 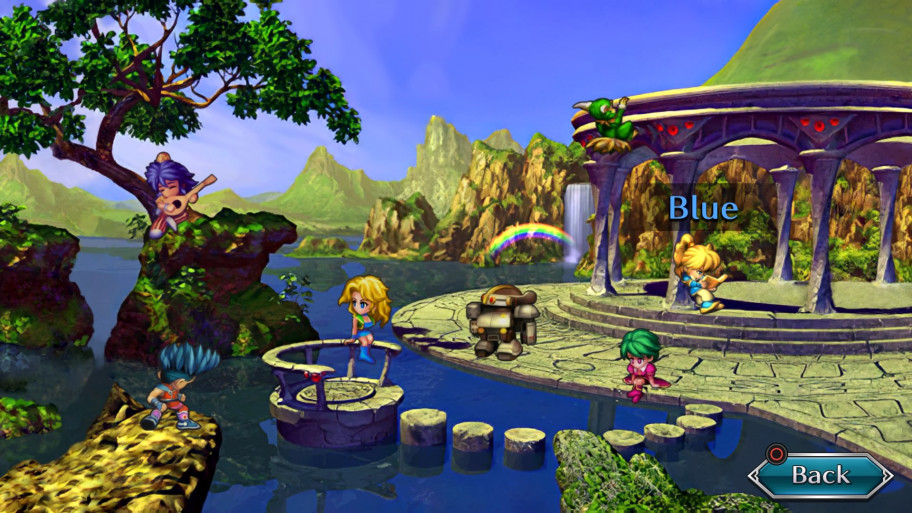 The choice of whom to play for is not easy, but in the end one way or another you try everyone.

At the same time, the characters are free to freely explore the world, move (almost always for free) between regions and even planets, communicate, trade, complete quests, fight – in general, do everything that is customary to do in large research RPGs. You can even intersect with the main characters from other branches – the action takes place in the same world, and they visit the same locations.

But the trick is that in Saga frontier there was a lot of this freedom even at that time (especially for Western players) – there are no quest markers, no one says exactly where to look for the necessary rings or runes, where to go, what to do in order to immediately advance through the plot. You are simply given general assignments and sent on a free float. 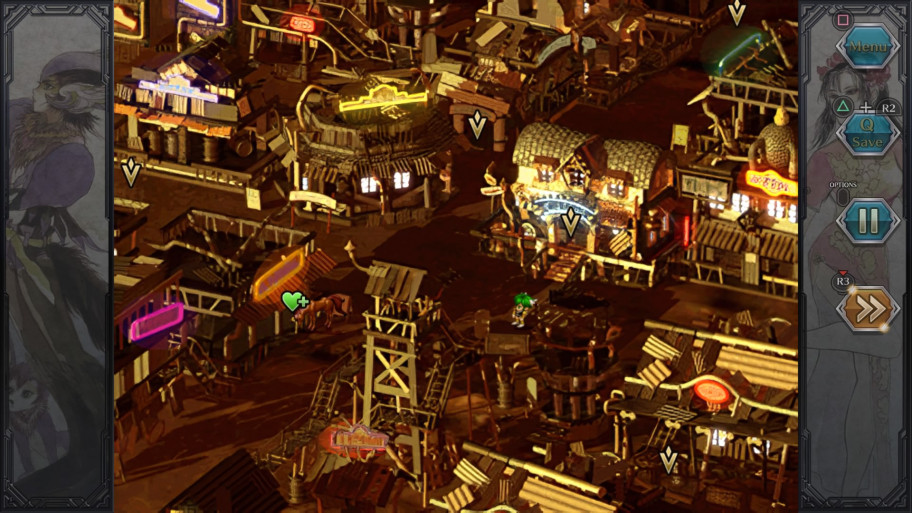 There are always many options for where to go.

As a result, playing for the same former supermodel Emilia, I either climbed into some kind of jungle, into strange locations with strange monsters that I did not need in the plot, then I ended up on colorful fairs with merchants and sorcerers from whom I could (but for now no need) to learn magic. Then quite by accident, having taken a ticket to Manhattan from despair (yes, there are many different destinations here), suddenly became a witness to the plot events. That is, everything is quite chaotic. 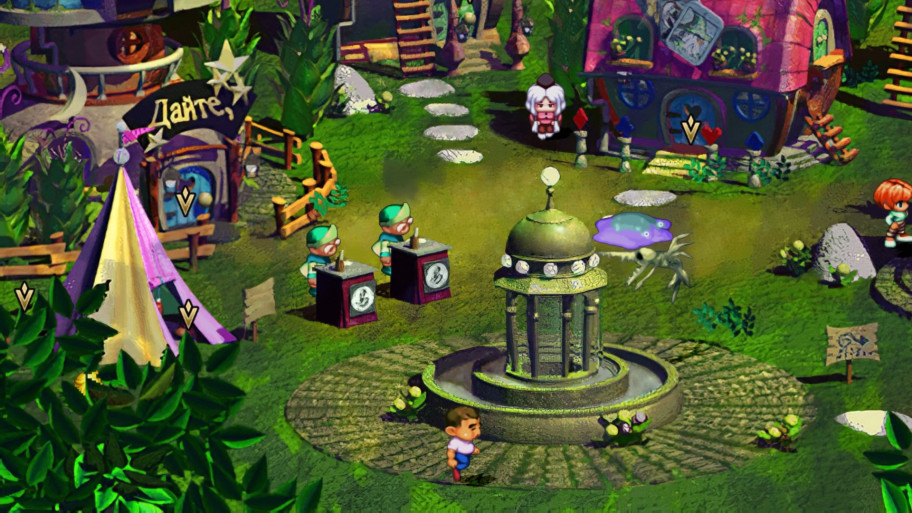 Where I am? And what have I forgotten here?

In the cases of some other characters, even at the start, it was not clear for a long time where to go and what to do, and the entries in the diary did not help much – everything here has to be learned by trial and error. And at the cost of your time. This I am describing to you the impressions of passing not the original, but the remaster – from this point of view, nothing has really changed. Only the storyline for Fuse was added, cut from the original. 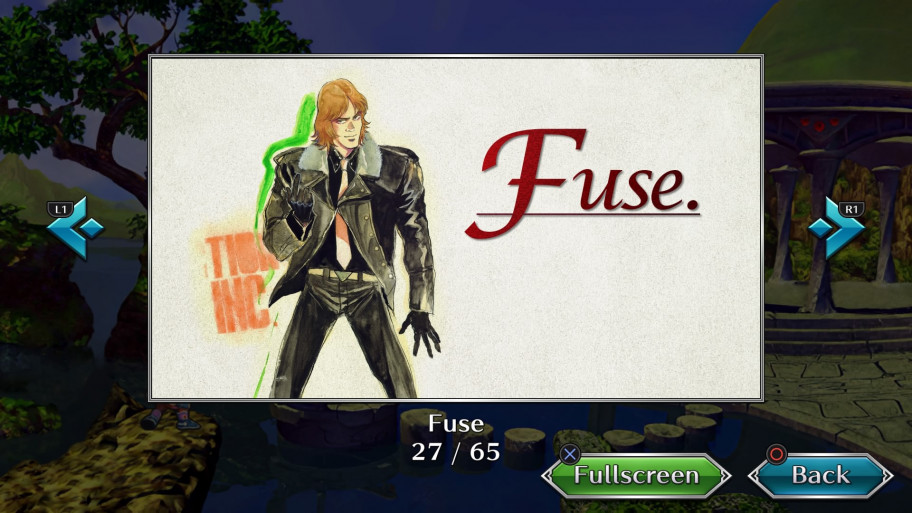 For this hero to become available, you need to complete the game at least once with any character.

At the mercy of chaos and randomness

The same definition – “chaotic” – can be applied in general to the gameplay Saga frontier… Everything seems to be standard. Two or three more characters immediately join the main character of any branch, and then more – they can be divided into parties and changed at the right time. With such a detachment we travel, explore, complete quests, communicate, trade and fight. Moreover, the fights are performed according to the traditional JRPG scheme – step-by-step, with a choice of what, when and whom to attack. 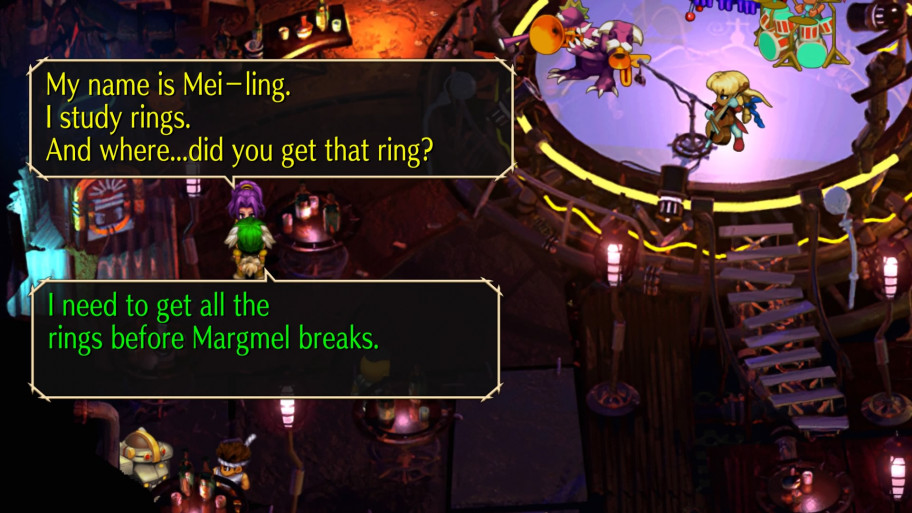 Of course, you also have to communicate, trade and listen to music in bars.

But there are also some highlights. There are quite specific differences between races that affect battles and pumping. Traditionally for the series, after each fight, the characters restore health. Life points are spent on this, and when they run out, the character will fall into a coma and can leave the party. Also, after each fight, even won with just your glance towards the enemy, the heroes immediately pump their parameters. Which ones are chaotically determined by the game itself. 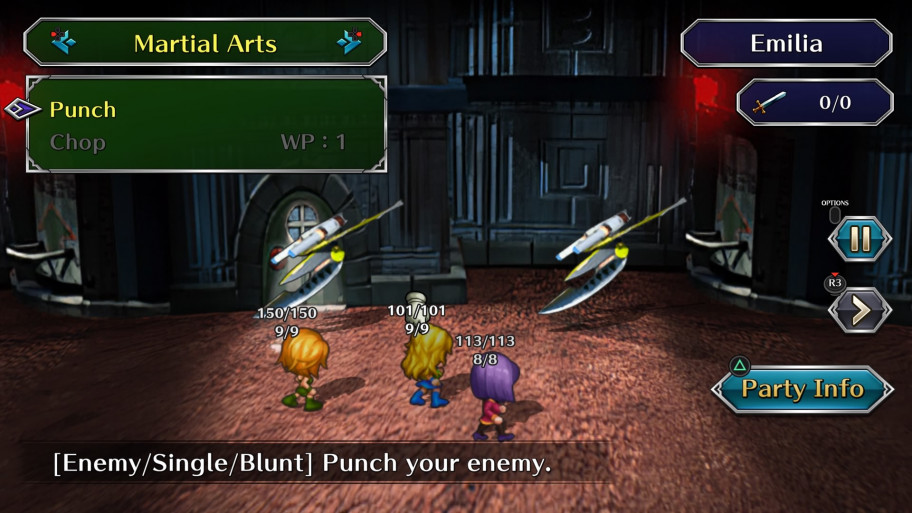 Female prisoners versus police drones are a common situation.

Characters can learn new techniques and spells equipped in the Arts section right in battle, but what it depends on and when it will happen is again not very clear. The main thing is to always keep ready a free space in the above section. That is, you can stoically survive in the most difficult fight and not learn anything, or you can blow off the lonely starfish with one blow and immediately get a new technique. The characters can also conduct joint combos, but here it is really unclear under what conditions this works – the game suggests that it is easiest when your wards use the same techniques, but this does not always work. 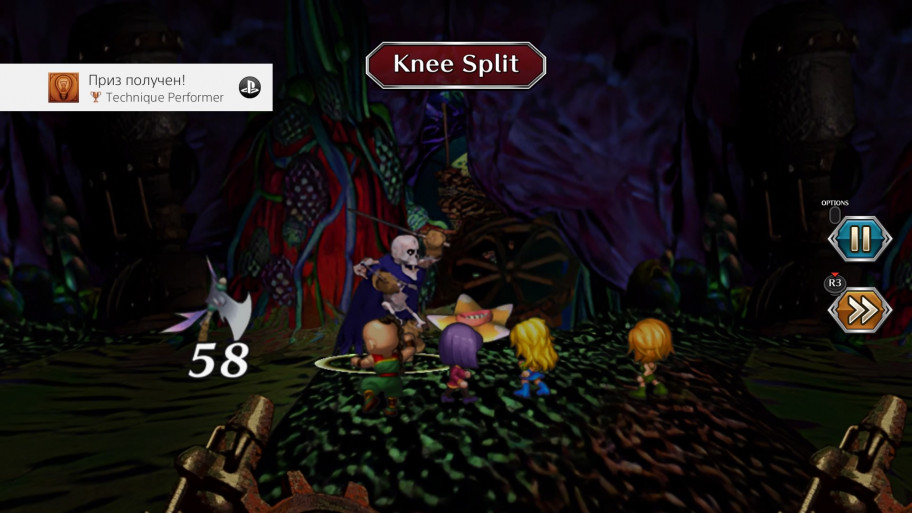 Finally, the balance of difficulty jumps chaotically from location to location, from one hero to another. That is, somewhere you can scatter enemies here, as I said, with one glance, and somewhere you will suffer, not really understanding how to defeat these reptiles. Even in the same location, going there again and seeing seemingly familiar opponents, you do not know who will be thrown at you – one frightened frog or her in the company of aggressive skeletons and fairies. 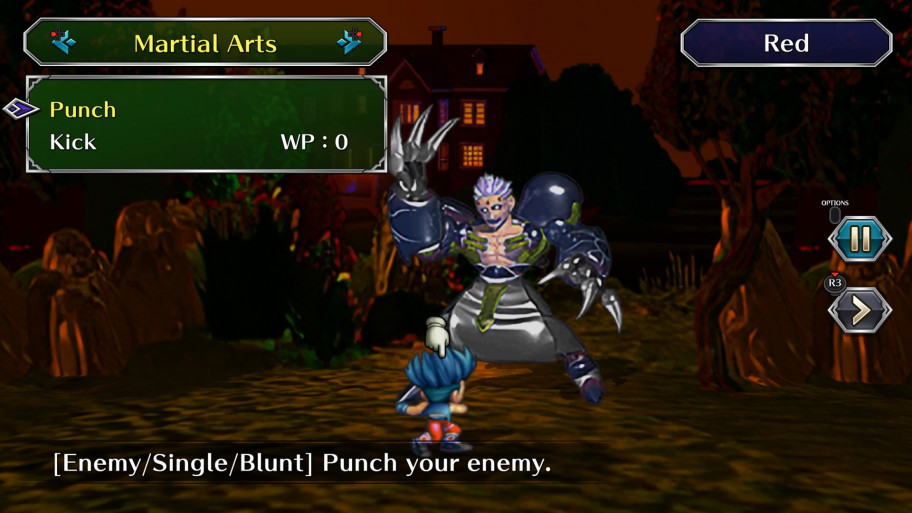 Here, it would seem, there are no chances at all.

Therefore, it is not always obvious whether grinding is worth it. Although the game literally screams about it – I have never seen such a number of enemies who constantly jump to the party and immediately revive after re-entering the map. Thank God, you can escape from the battle at any time without calculating the chances whether it will work out or not.

IN Saga frontier remastered, I repeat, all this remained practically untouched. The authors, of course, improved the picture, added a new storyline, additional materials and art, made it possible to speed up movement and battles threefold (thanks a lot!), But the root mechanics and balance were left as it is – even holes in the economy were saved, helping to quickly and dishonestly get rich ( for example, on the sale and purchase of gold bars). 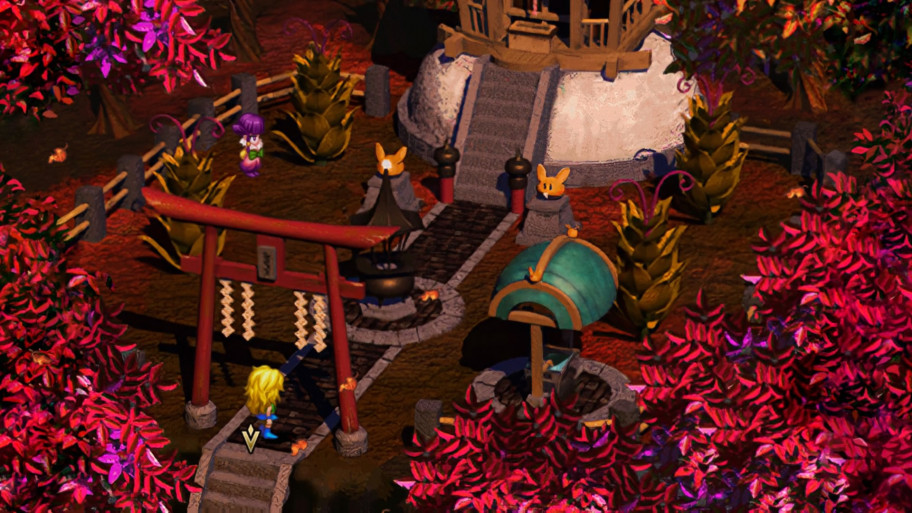 The updated picture looks both old-school and pretty decent at the same time.

TO Saga frontier remastered can be treated in different ways. On the one hand, this is the most valuable artifact of antiquity, an example of a primitive and very honest, uncomplicated gameplay, where you are given complete freedom and offered through trial and error to survive, study, overcome and win. I am sure many will only be happy to experience this now and make this nostalgic and informative journey back into the past.

On the other hand, imagine that even 20 years ago, the game caused a mixed reaction from the players accustomed to the comfort. Today, no developer and publisher in their right mind would release a project with such spontaneous gameplay. And from this point of view, a remake would really look much more logical, at least somehow taking into account the modern GOST. Which position is closer to you – decide for yourself, but if you consider yourself a fan and connoisseur of the genre, then you simply must try at least once Saga frontier remastered: or will tighten and fall in love tightly, or quickly discourage any desire to play further.

Pros: remaster of the cult RPG, which now looks pretty decent on modern consoles and computers; exciting storylines for different characters, plus one completely new; the highest level of replayability; original ideas in gameplay; very pleasant and nostalgic soundtrack.

Minuses: all sores and controversial features of the original remained intact; a lot of chaos and randomness in the gameplay; it is not always clear what needs to be done to advance the plot.

10 most anticipated games in May 2021 on Android and iOS